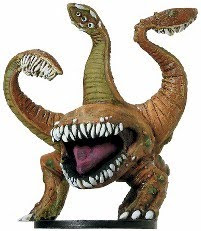 On today's morning commute, the radio news channel had their regular feature on food and cooking. Today's topic was "foods we love to hate". Two foods in particular were discussed: brussels sprouts and offal.

Offal (which I thought was pronounced "Oh'ful", but the food columnist insisted was pronounced "Awful") are the parts of an animal that most sane people refuse to eat. Tongue, kidneys, tripe, liver, brains, that sort of thing. The food columnist made a steak and kidney pie, which the radio announcer ate, and reportedly enjoyed.
Listening (in mild disbelief) to a discussion of eating offal, that led me to a reminiscence on the Otyugh, the larger-than-life, and more dangerous dungeon-version of the oyster. The Otyugh is the dungeon's garbage filter. It has a symbiotic relationship with the other dungeon-denizens, subsisting on their dung, offal and carrion, but also happy to opportunistically supplement its diet with fresh adventurer.
The Otyugh manages (just barely) to qualify as an old-school monster, as it does not make its first appearance until the AD&D Monster Manual. Do original monsters in the AD&D monster manual qualify as old-school? I think so, but others may disagree. The insiration for this monster is a mystery to me, but it was used quite regularly in my dungeons, as a justification for the lack of sewage systems or other ways of cleaning the dungeon. It, and the Gelatinous Cube, were the fantasy equivalents of the vacuum cleaner.
The Otyugh, and its' big brother, the Neo-Otyugh, warranted their own entries in the Monster Manual. That is somewhat odd, considering that others, like Nagas and Lycanthropes, got only one entry each, with sub-paragraphs explaining the different sub-types of that monster category.
I wonder, did the Otyugh make the cut of monsters for 4e?
Posted by Aaron E. Steele at 6:55 PM

I can't remember what module we were playing but I do remember fighting an Otyugh back in the day. I get the impression that they are some sort of lovecraftian/weird fantasy hybrid that seemed like a good idea, but probably wasn't. I have no idea if they are in 4e.

I don't believe in all the years I've played that once did I encounter a Otyugh. Until recently, I added one to an adventure of mine. Since I have clue how to pronounce it, I called it an Og-ah-tah. None of the players knew what it was right away. Then after I explained it they all had their own versions of what it was called. He's an interesting beast. I like him and plan to use him nd his big brothers a little more often.

@JLW: I hope someone comes up with and shares some plausible background on the Otyugh's development (I like a good yarn if nothing else). Seems reasonable that it has some cthulhu-esqe derivation.

@Tim: like Offal, i'm not exactly sure how to pronounce this monsters name. Perhaps we'll simply name him "oscar"

I just watched "Cloverfield" and at first glance I thought it was the creature from the movie. I quickly realized ti wasn't but heh...

I never actually faced an Otyugh, nor deployed one against a party, but I always liked the monster for the very reason you name: there need to be scavengers in a megadungeon, or else bodies and body parts will simply pile up and rot. But I guess I just used gelatinous cubes for that purpose. . .

I recently used one in my own campaign, and one of the players, ever so practical, actually managed to parlay with it and...well..."feed" it in order to accomplish a goal.

It was an interesting session to say the least, even moreso since the PC feeding it was my wifes twin sister, while my wife looked on at the whole proceeding with a mixture of disgust, amazement and horror (along with the rest of hte group).

There was a blog post a few months back (I believe it was on Grognardia) where it was discovered a number of the stranger MM monsters, including the bulette and otyugh appeared to be based on a line of small plastic Japanese toys from the early 1970s...the kind of thing that might have been hanging around the Gygax house and used as miniatures in a fantasy wargame.

@ Pal: I think it's pretty safe to consider anything in the 1st edition MM to be from the Golden Age of Old School D&D.

I remember reading that as well. Thought it was Arneson's campaign, but perhaps it was in the house of EGG.

Just not sure I recall which monsters were inspired by Japanese figures, and which ones had their origins elsewhere.

I agree tyugh is old-school (in my mind, everything up to Monster Manual II qualifies)

The thing that always mystified me was why a huge, crap & garbage eating tentacle monster would speak Common.

I did run an otyugh in a 3rd. Ed. game one time. It even had a couple funny lines.

This thing's pretty much the equivalent of the trash compactor monster from Star Wars.

I'd warrant the separate entries were merely an artifact of semi-pro publishing, but I don't mean to disparage.

I understood there was a Paizo Pathfinder module that had an Otyugh in it. I must check that out.

I thought the Otyughs were telepathic?

The module in question is Edge of Anarchy, the first part of the Curse of the Crimson Throne AP.

The Otyugh talks although it basically just says "food!"

Is the Edge of Anarchy module any good?