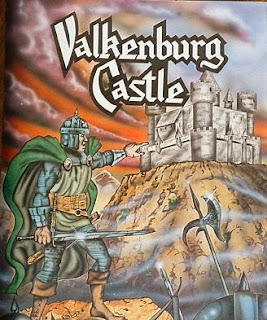 I provide this preface in featuring another microgame, firmly rooted in the old-school style of play: Valkenburg Castle, by Task Force Games.

But, while Deathmaze is utterly devoid of backstory, Valkenburg Castle is almost fully informed by it. A summary of the backstory is as follows. Valkenburg Castle has been siezed by evil forces. Hobart, grandson of the exiled King, raises an army and returns to reclaim his birthright.

The game is essentially a two player game: one player controls Hobart, his henchmen and men-at-arms, and the other plays the evil forces arrayed against him. Hobart and his forces explore and clear out the dungeons below Valkenburg Castle, collecting treasure as they battle through the corridors and rooms of the lower levels of the castle.
Hobart, his two Lieutenants, Rogier and Thorvold, and some wizards and burglars are represented by individual counters, and have multiple hit points. All of the other henchmen and men-at-arms are grouped into squads, with each squad possessing hit points equal to the number of individuals in the group, and represented by a single counter. The forces of evil are similarly represented by squads of orcs, some individual leaders, and a dozen other monsters, including dragons, Demons, and the like, again, with multiple hit points. While the leaders and the squads can move separately around the board, the squads receive a combat and morale boost when in the company of a leader.
The significant use of henchmen in this game, combined with the dungeon-crawling backdrop and use of individual stats for leaders, places this game in that no-mans-land between wargame and role-playing game, in similar fashion to early interations of original Dungeons and Dragons.
Posted by Aaron E. Steele at 1:07 PM

It might interest anyone reading this review to know that this long-out-of-print game has been re-released in a digital version, for use in Battlegrounds virtual tabletop software.