No Stranger To Controversy 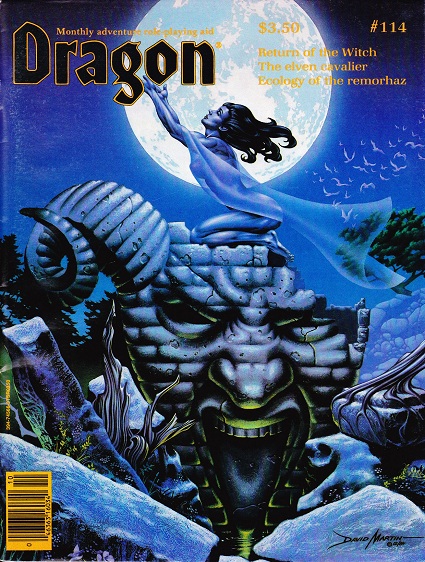 Back in the day, Dungeons and Dragons was no stranger to controversy. Besides attracting criticism for it's portrayal of gods, demons and devils, and attendant accusations of encouraging devil worship, there was ongoing concern about the depiction of naked bodies, predominantly those of women.

Those expressions of concern finally precipitated editorial changes at Dragon Magazine, in reaction to angry letters over what was perhaps the best cover of Dragon Magazine ever, that of Issue 114, published in October 1986.

The contents of Issue 114 were in themselves controversial, as Dragon Magazine once again published a revised Witch class.

However, it was David Martin's depiction of a naked Witch on the front cover of Dragon that resulted in a new artwork policy. That new policy was announced in Issue 117, following several months of argument and counter-argument between those who supported the depiction of nakedness in Dungeons and Dragons art and those who opposed it. 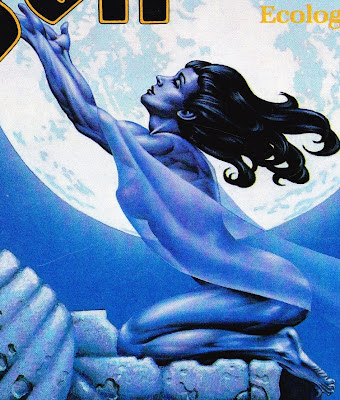 The early versions of Dungeons and Dragons were billed as a game for adults.  As the game grew in popularity, it garnered more teenage and pre-teen players.  It is little surprise, then, that there was heightened sensitivity amongst the staffers of TSR and Dragon Magazine to the issues of nakedness.

The Dragon Editorial staff concluded that the above depiction of a naked Witch crossed the line.

While it is easy for us to disagree with their assessment, we were not in the pressure cooker with the 1980's morality police, they were.
Posted by Aaron E. Steele at 7:36 PM

Looking at that cover again, the idol on which she is kneeling reminds me a bit of the infamous "green devil face" from Tomb of Horrors.

I remember this controversy. But I still loved this cover and this issue.

Course I'd love it as a print for my game room if I could find one.

There are actually two versions of that art piece, though I cannot find the other version online right now for some reason.

The other version does not have the diaphanous sheet coverig the witch... in the other version, she is truly "skyclad" as they say, and her breasts are not left plain all Barbie-doll style.

I *know* I saw it at one point in the late 80s; it might even have been used on a European (likely a German) game magazine cover, as I lived there in the late 80s. I remember it distinctly, recognizing it as having been used in a much more "demure" fashion on that Dragon issue...

You know, it's interesting: as a teen I was much more drawn to and titillated by the "naked" artwork of AD&D (not to mention the graphic art of Heavy Metal magazine and certain underground comics) than I am now. I feel I've grown beyond it at this point, neither pro nor con, judging mainly by their aesthetic value, not any particular emotional response.

Naked fantasy artwork (to me) seems like something aimed at younger people. But maybe I'm just old and jaded.
; )

It's easy to forget just how controversial D&D was back then, now that rpgs are so widely accepted in the mainstream and the 'angry mothers' (a term coined in Dragon editorials) of the world have turned their sights elsewhere. I'll think about this cover the next time there's a hue and cry over a starlet's neckline at an awards show :)

It is a nice painting though - I'm a sucker for the atmosphere a monochromatic palette evokes.

Mr. Matt is dead-on about that "green devil face". First thing I thought of, too.

Morality scare of the 80-ies or not, the American attitude towards nakedness is still just weird.

I never thought the Almighty Male Gaze had an expiration date.

But it's perhaps a sign of the maturation of the hobby that today, such arguments are done with the full participation of several diverse feminist-critical points of view, rather than just being "Oh my God! Think of the children!"

Have you been to Dragonsfoot lately?

No Andreas - is Jack Chick starting flamewars there again?

Wouldn't surprise me a bit.

No, what I referred to was their "Think of the children" attitude to censorship of language.

This sort of stuff makes me think of Kenny in the South Park "Major Boobage" episode. And then I laugh... a lot. Last page of the DMG with the succubus and the original Deities and Demigods held a special place in my mind growing up. Hmmm, why do I feel kinda funny. :)