Microgames: The Castle by Mayfair Games 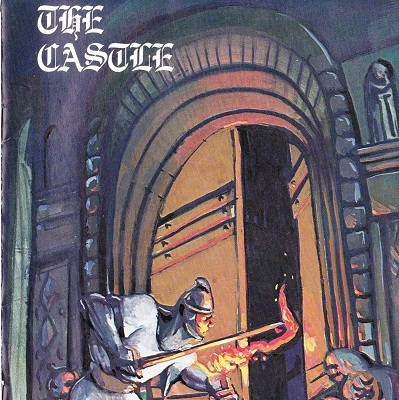 Among microgames, those microgames published by Mayfair Games are the most obscure.

I have already reviewed Transylvania, a fun little game of vampires and angry villagers.  The Castle, designed by Neil Zimmerer, has a style similar to Transylvania, with minimalist rules and and stylized counters. While Mayfair Games' The Castle shares some superficial similarities with SPI's Deathmaze and TFG's  Valkenburg Castle, two other excellent fantasy microgames, there are some interesting differences. 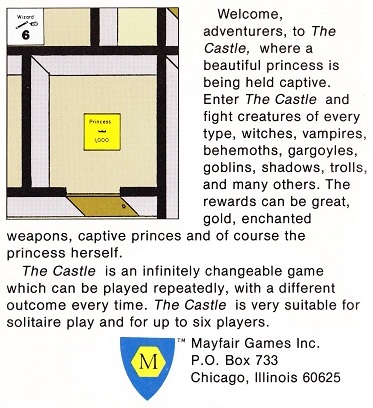 The premise of The Castle is outlined above.  This microgame is basically a dungeon-crawl through a castle.  The goal: rescuing and escaping with the princess in order to collect a 1,000 gold piece reward.  This microgame can be played solitaire or competitively.

Like most Mayfair Games microgames, the ruleset is abbreviated.  The Castle rulebook is a slim volume of 8 digest-sized pages, but contains all the rules you need to play this game. 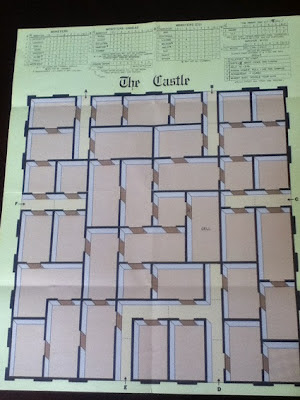 The Castle employs a fold-up mapboard.  The mapboard includes hallways, doors and rooms, through which the characters will travel.  At the top of the mapboard are tables, representing the combat abilities of the monsters appearing thoughout the map, with the associated damage those monsters inflict on the characters.

Characters start with the number of hit points indicated on their counter:  6 for Wizards, 8 for Clerics, and 10 for Fighters.

Monsters, too, start with the number of hit points on their counters: 2 for Bats, 3 for Goblins, 4 for Zombies, 6 for Gargoyles, and so on. 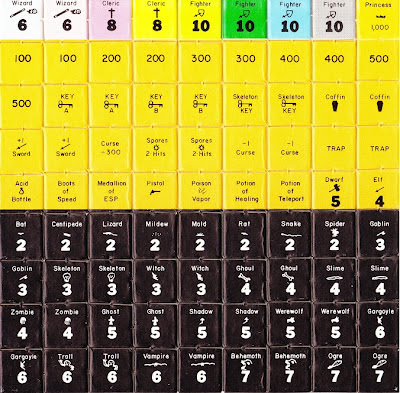 The gold treasure and black monster counters are turned face-down, and one of each is placed randomly in every room on the mapboard.  Thus, each room has a monster and treasure, but at the beginning of the game, you don't know what monsters and treasure occupy each room.

Your rescue attempt is complicated by the fact that the princess is being held in a locked cell.  In order to unlock the cell holding the princess, you must locate two of the six keys that are scattered amongst those face-down treasure counters.

There are six keys, two of each of three types of keys: A, B, and Skeleton (S) keys.  You need a combination of those keys (AB, AS, BS, or SS) to unlock the cell holding the Princess.  Thus, this game is not simply about following the most direct route to the Princess, you must enter other rooms to locate those keys.

As you investigate the rooms of The Castle, you will encounter monsters.  This game employs a unique combat system: you roll one six-sided die, and that die roll determines the damage inflicted by both the character and the monster. 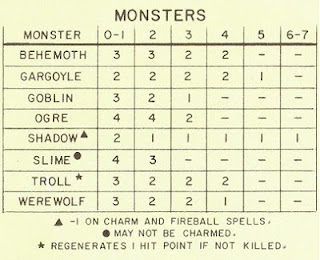 In general, the lower your dice-roll, the more damage the monster will inflict.  For example, if you are battling the Behemoth and roll a 1, you inflict 1 damage to the Behemoth, while the Behemoth inflicts 3 damage on you.
Posted by Aaron E. Steele at 5:05 AM

I actually owned this microgame. My brother and I played the hell out of it. Then we got TSR's Dungeon, and Castle was shelved and eventually lost.

It's a great little game. I like the Mayfair design ethic, these games were very playable.

I must say, I'm greatly intrigued by that combat system.