Greatest DnD Sword Of All Time? 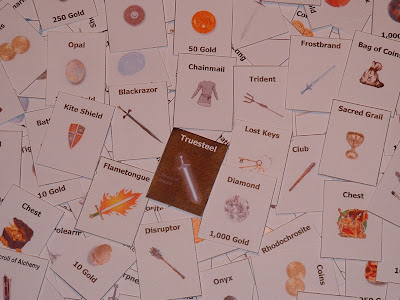 What is the greatest Dungeons and Dragons magical sword of all time?  Three classic DnD magical swords are hidden amongst the treasure and equipment cards above, and those three represent some of my all-time favorites.  Truesteel, a Magic Realm stand-in for Excalibur, gets prominently featured at the centre of the image, but the other magical DnD swords are lurking nearby.

The above picture reveals just a sample of the equipment and treasure cards that I printed, when I was working on my resource card project several years ago.  Each card is roughly 1" x 1 1/4", a card size I have since decided is too small to accomplish the task of both communicating the look and use of each item.

I prefer the named magical DnD swords over the generically powered magical swords.  The vorpal sword and sword of sharpness were both cool, but the fact that they were a class of sword made them feel less unique.  I suppose you could have ruled that Vorpal and Sharpness were their names, thus solving that problem.

What is the greatest magical DnD sword, and why?  Bonus points if you can find Sharpness in the image above.
Posted by Aaron E. Steele at 3:59 PM

Blackrazor is the most awesome D&D sword of all time. Mostly because it's a CN soul-sucking sword that lets you be just like Elric, and if you try to keep it you'll soon learn you probably don't really want to be Elric.

If there is some other answer I may just not understand the question.

Full disclosure: I used Blackrazor as a major artifact in my last multi-year GURPS fantasy campaign, but no PC ever did get their hands on it.

Blackrazor was awesome, but I'd have to say my favourite was the Sword of Kas. I played a half-orc fighter/assassin back in my AD&D days who, for a brief time, possessed it. It proved the death of him, but for a few months, it was truly epic.

Not quite so fast....
Blackrazor IS amazingly epic and iconic....

I don't have the stats on it handy, but I recall Fedifensor being a really cool sword. It's from an adventure of the same name in Dragon #67. PCs had to travel through the astral plane to recover the sword from a Githyanki outpost.

I found the sharpness sword ( btw the 10 gp card and mace of disruption-
Blackrazor for sure is the ultimate D&D sword from a module. The Seven Swords from issue 74 of Dragon Magazine were also pretty cool swords.

Yea Fedifensor is a cool sword as well its a +2 bastard sword. 17 Intelligence, ego of 18 and lawful good. It cannot be touched or carried by someone of a different alignment unless the blade is in a scabbard.

In the hands of a paladin, it is a +5 weapon and also has following abilities : 50% magic resistance 5ft radius, Dispel magic can be cast upon any spell cast on the sword or its wielder, At a range of 1"/paladin level, sword can detect the presence of major evil entities ( demons, devils, etc), If blade is unsheathed it will glow bright red as if drawn from a forge, It inflicts an additional point of damage for each level of the wielder if used against demons.

+2 against all creatures except undead, glows brilliant blue when within 30ft of any undead, +3 to hit and damage against undead, used against vampires, blade flares and sparks when it hits and inflicts an additional 10 points of damage per hit.

Though fantasy literature and not D&D I always thought the swords from Book of Swords series by Fred Saberhagen where awesome and would make cool D&D swords. The Mindsword is by far the most powerful.

Tom said...
I found the sharpness sword ( btw the 10 gp card and mace of disruption-