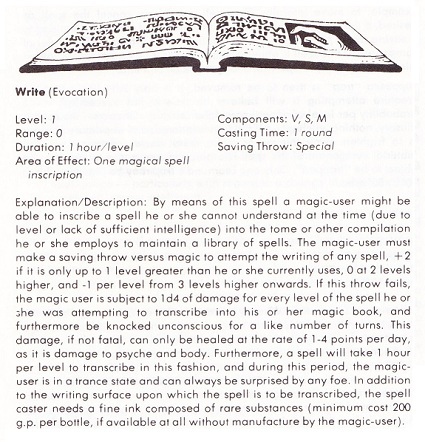 Still giving some thought to the development of resource cards.  In particular, how to structure the decks.

It seems to me there are at least two ways to structure resource decks.

The first way is to structure the decks based on character class.  For example, developing separate decks for Magic Users, Clerics, Fighters, Thieves, Barbarians, and Witches.  Each deck would contain the cards necessary for that class, including spells, character statistics, character illustrations, abilities, treasure and equipment specific to that class, and might cover three character levels.

The second way is to stucture the decks based on type of resource.  For example, separate decks for spells, equipment, treasure, character illustrations, and so on.  So you might have a deck of weapons, a deck of first-level spells, a deck of character statistics, a deck of monsters, and a deck of magic items.

Perhaps both kinds of decks would be useful.  For example, you might want a deck of spells, but you also might want a deck that is specifically for Witches, containing all the cards you would need to build a Witch character.
Posted by Aaron E. Steele at 2:01 PM

I'd lean towards option #1 since having multiple decks could be a bit cumbersome. What about a character play mat with designated areas to lay your cards out? Inventory section, equipped section, spell section etc for easier access to the cards.

I really like the idea of a character mat.

I'm definitely in the #2 camp.