My interest in spell cards is quite simple: i've been tinkering with the idea of a card-based Dungeons and Dragons accessory, where all of your game resources are in card form, and can be swapped in and out of a three-panelled sleeved booklet, as you aquire and spend resources.

Those card-based resources would include, treasure, magic items, spells, equipment, relationships, and other trackable items.

In addition to  the home-brew spell cards featured by several old and new-school bloggers, Wizards created a card-based accessory for 4th Edition, tied into their AEDU system, by issuing decks of powers cards.  I really loathed those cards, for a couple of reasons: one, they lacked artwork; two, the 4E powers themselves were too mechanical; and three, WOTC ignored all the other in-game resources.

On the other hand, Paizo published decks of item and treasure cards, featuring lush illustrations, but the related game mechanics were absent from the cards, as were resources like spells.

One of the things I loved about the ADnD Players Handbook was the inclusion of artwork  accompanying the spell descriptions.  Case in point is the spell, below, Dancing Lights. 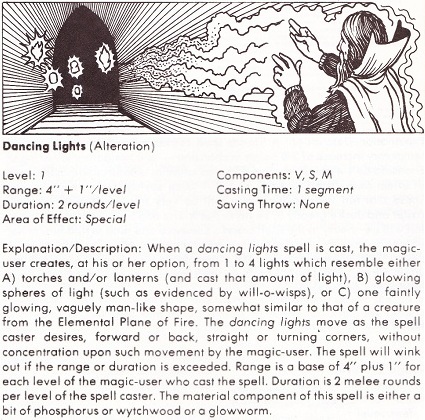 Although uncredited, I believe this spell features a Dave Trampier ilustration. It would be lovely to have the above artwork in color, though the black and white version is perfectly serviceable.

Yes, the spell description is probably sufficiently clear that an accompanying illustration is unnecessarily decadent, but having an illustrated set of resource cards like this would be a dream come true for this old-schooler.
Posted by Aaron E. Steele at 6:50 PM

Agreed. I like the Paizo cards, and used them when playing with my kids, but I feel more could be done with them. For example, give each resource card a number (e.g., 0-3) and you've solved encumberance. A character can carry up to their strength in cards. When a resource is used up or accidentally destroyed, you toss the card. And yes, a deck of spells would be awesome. It would make representing spell books a snap, DMs could more easily establish the flavor of their campaigns, and it would be satisfying to slap down a spell during play.

I heartily endorse your vision. I've often thought about passing out cards for gear and limiting carrying capacity by giving each player a deck limit, based on strength or something. Some items the players would have to surrender when depleted, like a wand or arrows.

I've always wanted to do something like this with magical items, particularly those that have yet to be identified.

I always liked the Spell Cards TSR put out for AD&D as I could control how and when I wanted to give them to the characters. I also used them as a way to know what spells the characters had memorized ( they gave me their spell cards that they had memorized/prayed for and Id give them back once they used them. This way no one could "switch out" a spell for another needed spell without me knowing).

It was also an easier way for spell casters to handle the spells they had instead of trying to find it in the book. Earlier on, before spell cards came out,we always used to write our spells out on index cards and keep them in card holders separated by level of spells. I still have many of my old spell cards that I color coded for offensive, defensive and misc spells.

I found the item cards put out by Paizo very nice to collect, but honestly trying to get my players to use them was impossible. Originally I thought it would be a good way to control and moderate my players magical possessions but when each player had two dozen potions, I didnt have enough potion cards to cover them all, for example. Also, they never referred to the cards, often lost them or whatever. So I gave up on them.

I agree Id also like to see spell cards with images of the spell in action- maybe as a muted image in the background of the spell description so as not to take up space on the card with an image.

The problem with over use of cards is that the game can get bogged down with them and the game becomes like a card D&D game. Im specifically referring to 4th edition where spells, actions, etc were all on cards and my players stacked them up and played them out like a game of UNO. I hated them as a DM but I gotta say they made things easier as a player at least for that style of the game.

I do agree I like Brandon's suggestion of cards as a means for encumbrance. Though I think this would be easier for earlier versions of the game rules than latter. Anything to make monitoring encumbrance easier.( Mazes and Minotaurs has a great simple way to handle this btw which I may adopt for my D&D game)