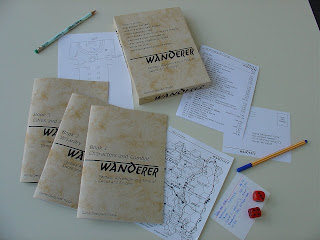 Of course, Wanderer RPG, is not, as far as I know, in production, although you just know that some DIY publisher would have a runaway OSR hit on their hands (that is, by selling at least 100 copies) if they actually published a playable version of a Traveller-based Fantasy game.
I won't rehash the genesis of this Wanderer RPG mock-up. You can find several threads talking about it on various role playing boards. Over at the OD&D board, they have a thread devoted to the creation of Wanderer RPG. There are several threads speculating on what Wanderer RPG would look like, over at RPG.net here and here. There is even a thread on the travellerrpg boards which you can find at the link here.
In a fit of nostalgia, I just broke out my old Traveller LBB's. Ah, the memories.
Posted by Aaron E. Steele at 7:33 PM

That is so F*ing awesome. What an amazing mock-up. Somebody totally has to make that game. I'l going to hop over to those threads to check up on the current discussions.

I actually created Flynn's Guide to Magic in Traveller to help encourage someone to develop the Wanderer RPG. Sadly, though, no one appears to have taken the bait and used the OGL system in that tome to fuel the magic system of such a product. If all else fails, I may follow that up someday with my own Fantasy Traveller product.

But that's a story for a different day. :)

It was, and remains, a great idea.

Actually there is a Wanderer game in production. I've been working on it off and on over the past year. If you want to links to the docs let me know. I have a new version that hasn't gone up yet as well.

how wild is that? amazing mockup.

Ara Kooser says that an implementation is in the works. I'll be opening my wallet for that!

That is an amazing idea. nice job on the mock up!

I'd certainly like to see the character generation portion of the game at least.