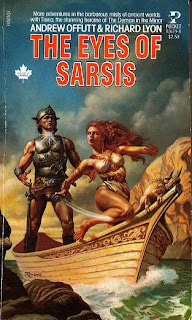 While my return to the roots of Dungeons and Dragons began with news of the impending release of D&D 4E, it wasn't until I read angry posts on the WOTC forums, criticising an author of a blog entitled Grognardia, that the real journey began. I was perplexed by the vitreol and derision hurled at that blog's author, since what Chevski reportedly said made perfect sense: with 4E, WOTC was abandoning the historical D&D, reforging it as a miniatures battle game of mechanical elegance and efficiency, bereft of soul, context or purpose.

I spent an entire evening poring over Chevski's accumulated blog entries. My wife found me, furrow-browed and blearly-eyed, in front of the computer screen at 5 o'clock the next morning. Some of my favorite entries were Chevski's explorations of the fantasy fiction that served as inspiration for Gary Gygax -- the fantasy fiction found in Appendix N of the original 1979 Advanced Dungeons and Dragons Dungeon Masters Guide.

I have been wanting to explore those books myself but, until now, laying my hands on a sizable collection of the fantasy books appearing in Appendix N seemed out-of-reach. That changed over the weekend, when I scored a broad assortment of slim pulp fantasy fiction books at a local book sale.

Along with all the other plans I have for this blog, I now have another: read at least one of those fantasy fiction books, each week, and post my thoughts on its applicability to old-school gaming. My reviews will be more workmanlike than sagely: I have not written a book review since my university days, some (cough) years ago. My goal: mine those books, for interesting themes and adventures.

So just remember, i'm not to blame for that even louder droning sound you'll be hearing, emanating from this blog over the next several months.
Posted by Aaron E. Steele at 9:26 PM

It was Appendix N that introduced me to the sword & sorcery genre, too. Prior to this my only source of inspiration for my early D&D experiences lay in Lord of the Rings, and mythology - particularly the Ray Harryhausen movies. To this day I can't run a combat with skeletons without imagining them fighting with jerky, stop-action motion.

I'll be forever grateful to Gary and his Appendix N for opening up a whole new world for me and introducing me to Howard, Leiber, Lovecraft, Moorcock, and other fantastic writers that have been stirring my imagination and inspiring me ever since.

Your post reminds me that I really need to read more.

BTW: I love those hirst ruins from yesterday. Awesome!

I can't bring myself to get into 4 for that very reason-it has to be about the story for me.

Great! Well, almost great. What are you going to do with the passel of Gor books you scored?

Having only read a few of that series it seems that it started out as a decent ERB knockoff but quickly descended into more elaborate fanservice based on the S&M elements. What I'm saying is, I'm not sure I'm ready for wench-stake and slave-posture house rules ...

I didn't know people still engaged in the ancient sport of Chevski Blaming.

He nipped me with the Appendix N bug last year. I still have a dent in the wall from Sign of the Labrys. :(

An interesting, project. I look forward to your reviews.

I'm swiping this for my blog. This is simply awesome.

Sean: having just finished reading the first book, I can only lament that I did not take up this project sooner.

Christian: thanks for the compliments on the Hirst ruins. As my first project, I was quite pleased the way it turned out.

David: I know there are some the swear "the game remains the same". Like you, that claim rings hollow to me.

Roger: the Gor books are problematic. I will likely leave them to the last, as the thought of reviewing them leaves me with some unease.

Chris: Chevski-blaming is the new official sport of the OSR. Havn't you seen the commercials?

Trey: thanks for the encouragement. I will likely post my first review by the weekend.

Chev: Forget Chaucer, have you seen what Seutonius is writing about you?

I reread the first of Offut's Thieves' World stories, Shadowspawn recently. I loved it as a teen, but, as an adult, I found it rather workmanlike- still,though, not an total waste of an evening. I also think that I may have built my earlier opinion based upon some of the subsequent stories featuring the same protagonist.
Coincidentally, I also scored some GOR paperbacks last weekend. I'm reading the first one now. I've been told that the first five are relatively innocent, but I've already passed over a few passages that make me a little uncomfortable- and I'm hardly a prude (i.e. Corben's Den can be found near the top of my own "appendix n"). Anyway, I look forward to your opinions of Offut's novels.