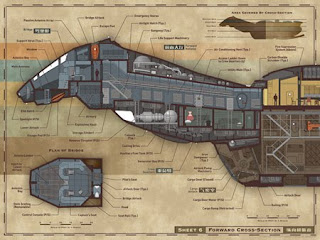 Okay, i'm a geek, but one of the things I loved about Traveller and other science fiction roleplaying games was the starship blueprints.

My love affair with starships began, as was the case for many of us, with Star Trek. While I became acquianted with Star Trek through the television reruns, it was the Starfleet Technical Manual that cemented our relationship. I remember from 1975, my brother bringing home the Starfleet Technical Manual. Within that book were page upon page of blueprints for everything from Starships to Spacesuits, Planetary orbits to Phasers, Tricorders to Tridimensional Chess. I pored over that book for hours, carrying it with me to elementary school, and dreaming of being a starship captain.

I discovered Dungeons and Dragons via my brother in 1976, finally permitting the stuctured role-playing I craved. Traveller soon followed in 1978. I never played Traveller as much as I played Dungeons and Dragons, but I always had a soft-spot for that game. My favorite supplements were the ones with starship blueprints. Leviathan. Traders and Gunboats. Broadsword. Azhanti High Lightning. My favorite starship blueprints, by far, were for the Zhodani: many of those starships had a winged, spidery, almost Romulan quality to them. As I recall, Judges Guild produced some nice starship blueprints, though my collection of Traveller stuff is largely official GDW material.

Which brings me to Firefly. I missed Firefly while it was in distribution. I suppose the fact that Firefly was the brainchild of Joss Whedon, of Buffy the Vampire Slayer fame, kept me away. Having since purchased and watched the entire series and the related movie, Serenity, I can confidently say that, as far as science fiction television goes, Firefly is probably the closest we have ever, or will ever, see of a Traveller series.

As a fan of Traveller, I really like the Firefly universe. I also like the starship, Serenity, which has a high tech/low tech quality to it that I always identify as Travelleresque: in the Traveller games we played, we were always living hand-to-mouth, scrapping every last credit together to pay for the repair of a broken engine part or the fuel we needed for our next jump. In Firefly, the same desperate hand-to-mouth struggle exists.

Several free blueprints for the Firefly starship exist on the internet. Some are designed to fit with the standard 1.5 m x 1.5 m blueprint grid used in Traveller. But my favorite Firefly blueprints are the ones found here, in this booklet. Though costlier than free, I absolutely love the level of detail they have provided, which brings me, full circle, to the Starfleet Technical Manual. The level of detail being provided in the Firefly Reference Pack seems absolutely decadent. But its the sort of decadence that only someone who would pore over a Starfleet Technical Manual at the age of eight can appreciate.
Posted by Aaron E. Steele at 9:16 PM

10 pages there just for Serenity! And here I thought the 3 pages in the Serenity RPG itself were pretty decent... Definitely for the Firefly connoisseur.

I AM a Firefly connoisseur, but I'm too cheap to spring for this...hopefully, I'll be able to read it some day down at the Wayward Coffee House (a Firefly themed coffee shop across the street from my local game shop).

@ Pal: I love this kind of thing as well, which makes it all the more frustrating that I'm so artistically inept (especially at mapping/drafting). Thanks for the pix!

My wife and I JUST started watching this last week. Disk 2 arrived today! I'd caught only one episode when it aired and then--of course with all things that are good in the cosmos--it was striken from existence.

Firefly is indeed cool. And I'll second you love for bullprints and the like.

Unlike you, I came to Firefly because of Buffy. But for some reason, I never was hooked in the original Fox run (I think it was because they didn't run the show in the order that was intended). But when I watched the series on DVD, I fell in love. To this date, it's my favorite space-related sci-fi show ever. I totally agree that it's the closest thing to Traveller ever put on film.

I love those deck plans but I'm too cheap to spring for them. :(

I must be the only Sci-Fi fan who doesn't like Firefly. To me it feels like Traveller with all the coolest parts sucked out to meet budget constraints.

At the same time...love the ship. Very cool design.

@Barking Alien, I'm curious about what cool parts you're referring to... having experienced the show before immersing myself in Traveller (though being aware of the latter for years and years before the show), I, like others above, have been struck by how all of the cool parts are right there.

BarkingAlien: I, too, am curious. I'm guessing you mean the cool Traveller aliens, jump-drive, explosion-filled starship battles, spaceports, high technology ... but i'm curious to know what else you feel is missing from Firefly that would make it a truer Traveller series.

Ze bulette: I agree. I'm not quite there yet.

JB: how cool is that, to have a firefly-themed coffee shop nearby!

Jay: enjoy. considering your affection for sci-fi, you took your sweet time getting around to this! :D

Risus: my wife loved Buffy, but I came to it too late, and so felt like a bit of an outsider.

I agree with you on the appeal of starship floorplans.

As for Firefly; I watched every episode as it aired and was frankly kind of 'meh' about it until at the end of the episode they would do something great that would suck me into watching the next. But FOX aired it out of order, the two-hour pilot aired halfway through the season, even the flashback heavy episode aired before the pilot.

But, when i got it on DVD and watched again with the episodes in proper order, it really worked for me. so maybe you didn't miss as much as you think missing it when it aired.