Rewriting The History Of Dungeons and Dragons 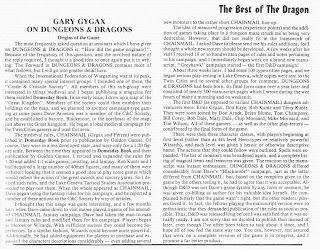 There is an old axiom: history is written by the victors. While I do not own the magazine from which the original article was drawn, there is a brief history of the origins of Dungeons and Dragons, appearing on page 29 of the Best of Dragon Magazine I. Written by Gary Gygax, it summarizes his take on the development of D&D. By the time Gary wrote that article, D&D was well on its way to becoming a huge hit. For me, and many others on the periphery of the hobby, that article became the accepted history of the game for many years. As Dave Arneson did not have his own pulpit from which to preach, few were aware of his perhaps different perspective on the development of the game. The internet has been of great assistance in providing us with a more varied and fulsome account of the early days of the hobby.

Dave Arneson, who is credited with co-authorship of Original Dungeons and Dragons, played a different variation of the game than was revealed in those early D&D rules. In Dragons At Dawn, D.H. Boggs attempts to recreate that game. Mr. Boggs also provides us with the following alternate history of the Dungeons and Dragons game:

"One of the wargame rulesets that became a big influence on Arneson's fantasy campaign had been co-authored by Gen Con founder Gary Gygax. After Arneson demonstrated fantasy roleplay gaming to Mr. Gygax in the fall of 1972, Gygax became extremely enthused, and offered to write up the rules for Arneson and publish them. Arneson had no means to attempt this himself at the time and young Dave [24] had collaborated once before on a set of naval rules with the nearly decade older [33] and well connected Gary, so he readily agreed to have Gygax take the lead on typing up and publishing the rules. He mailed Gygax a 16 page manuscript of his rules and consulted with him by phone. This collaboration led to the first published fantasy RPG game in 1974; a game that has continued to grow and attract new players. However the 150+ pages as published by Gygax and business partner Don Kaye were somewhat of a compomise between the way each author actually played, with by far the majority of the rules coming from Mr. Gygax. It was a similar, and yet in many respects, a very different game from what Arneson had been playing with his group in Minneapolis."

I think the subtext of this alternate history is interesting. We are fortunate to have a wealth of information about the early days, via the various discussion boards and gaming sites. I like to think that, some 35-40 years later, old hatchets have been buried, festering wounds have been lanced, and those on either side of the Gygax/Arneson authorship debate are sharing the same pub table, enjoying a couple of pitchers of beer, a plate or two of nachos, and swapping stories of memorable D&D campaigns of yore.
Posted by Aaron E. Steele at 10:25 AM

There's always more than one side to a story. I have always been disappointed by how deeply dug into the trenches many fans have been. Hopefully that's all in the past now. D@D is a great contribution to finding out more about how things really happened.

I am a fan of history and I find this vastly interesting - not the epic he said/she said scale that seems to be prevalent at this time, but the actual doings and beings that forged this very niche hobby and whose influence still has an effect, no matter how small, on how we gamers perceive the games we play, the systems we use (including all their wonkiness) and the people who write them (I hope this makes some sense).

I agree, there's always more than one side to these stories. Full props to the contributions all of those early pioneers made to expanding the hobby. Dave made valuable contributions, as did Gary. I love the minutia as well, and wish that 'someone' would finish that history of the hobby they are supposably (sic) writing. I hate having to wade through the various rpg discussion boards to find this or that particular pearl of wisdom or reminiscence.