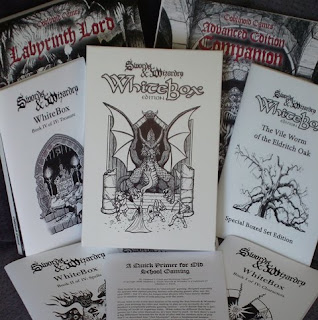 I'm such a Libra. I'm still on the fence when it comes to which retro-game is my favorite. I like Swords & Wizardry because it is the closest to original Dungeons and Dragons, and is incredibly rules-light. On the other hand, Labyrinth Lord is (in my mind) a superior implementation of B/X.
Happily, I don't have to choose between the two, I can have both! I picked up a copy of Advanced Edition Companion (AEC) for Labyrinth Lord from my FLGS, The Sentry Box, yesterday. As an active proponent of the FLGS system, I waited for it to arrive at the store. This meant having to wait an extra couple of months, compared to those of you who ordered it directly through Goblinoid Games or Lulu. For some reason The Sentry Box only ordered one copy, so my apologies to those of you in Calgary who were waiting for it to arrive: you'll have to ask Don to bring in another copy for you! I have not had a chance to dig into AEC, but I intend to give it a closer look on Sunday.
Here's a photo of my Swords & Wizardry boxed set, along with my Labyrinth Lord and Advanced Edition Companion books.
I also picked up used copies of DA3 and DA4, Dave Arneson's City of the Gods and The Duchy of Ten for Blackmoor. The two of them were too shy to pose for a picture -- perhaps they will discover their courage tomorrow.
Posted by Aaron E. Steele at 1:13 PM

I hear you! My S&W white box hasn't even arrived yet, and I'm already thinking about buying Labyrinth Lord.

I was playing AD&D long before the Moldvay Basic set came out, so I'm not really familiar with how it differs from OD&D. I see that a lot of old-school players make Labyrinth Lord their system of choice, so I'm really curious about it. I'll need to buy a hard copy copy to evaluate it, though; I just can't make my way through large PDFs.

I was looking at that system.

My crew is just trekking through the Temple of the Frog right now. I've owned DA3 and4 for years but have never used them.

Some of us play both games. :)

While I love B/X, the LL+AEC looks sweeeeet!

And the simplicity and d6 damage/Hit Dice symmetry of White box is oh-so-tempting.

Hey, I was at Sentry Box around 12:30 on Friday buying the latest Pathfinder release and the guy at the cash was calling to someone to let him know his copy of Advanced Edition Companion was in. Was that you?

Don't worry man, there's no need to choose! It's all good. I suppose the only thing to keep in mind is that if you want high fidelity to OD&D, as good of a game as S&W is, with the changes they made in it the core LL book is actually closer to OD&D. Add the Original Edition Characters book and you're even closer. But I'm talking about actual rules only, some people have said that the "feel" of S&W they think is closer to OD&D, which could be true, I don't know. Depends what you mean by "feel." I don't know for sure who has actually played OD&D and read S&W and has commented either way. But in any case, any of these games I'd say is basically old school so go with what you find most appealing.

Sean: I really appreciate that there are free versions of both games. I'm with you on wanting bound copies though. Plus, I like to put my money where my mouth is.

John and Dan: I agree, they're both good systems, and I like that both are easy to house-rule.

Obiri: i've been enjoying the game recaps on your blog!


Pat: that's because we both have such good taste in games. :D

Rognar: Indeed, they called me at my office at 12:30 to let me know my AEC had arrived. I picked it up at about 7 pm that evening.