Appendix N: Demon In The Mirror 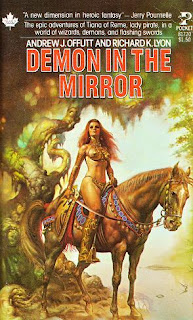 Our exploration of the 1979 Dungeon Masters Guide Appendix N begins in the middle, a fitting place for Andrew Offutt, for reasons beyond mere alphabetic order. Offutt is neither the trailblazer nor capstone of fantasy literature, falling somewhere in the comfortable, hackneyed and squishy center.

On the surface, one has to wonder why Andrew Offutt is mentioned in Appendix N at all. The only Appendix N recognition he is afforded is in relation to the Swords Against Darkness anthology series, to which Offutt acts as series-editor and occasional contributor. In fact, Gygax’s Appendix N specifically mentions the third book in that anthology series. But within the pages of book three, Offutt’s singular contribution is in writing that anthology’s forward. In itself, authorship of a forward can hardly be worth mentioning, compared to the output of the other authors referenced in Appendix N.

If Offutt is not immortalized in Appendix N for his lucid and witty forwards, then for what? In fact, Offutt’s contribution to fantasy literature is much broader than mere editorship of an anthology series. He presides over the Science Fiction Writers of America Association from 1976 to 1978, and is widely published by 1979, having already written some 17 fantasy novels under his own name, with dozens more erotic fantasies to his credit, all published under pseudonyms. Some of Offutt’s fantasy novels are pastiches based on Robert E. Howard’s creations -- Cormac mac Art and Conan. Others are all his own, such as the War Of The Gods On Earth series, and the War Of The Wizards trilogy. Our reviews begin with the first book in Offutt’s War of the Wizards trilogy, entitled Demon In The Mirror.

Authorship of Demon In The Mirror is credited to both Andrew Offutt and Richard Lyon, and is published by Pocket Books in 1978, predating, by one year, the publication of the DMG. A slim volume of 190 pages (not unusual for pulp fiction), the cover art is by Boris Vallejo, and reveals a practically-nude Tiana Highrider, protagonist of our story, astride her faithful mount Windsong, in a scene from the chapter entitled Incident In Dark Forest.

As the story opens, we find Tiana, a pirate-captain of former aristocratic stock, coming into possession of a set of sorcerous books, and a severed hand belonging to the wizard Derramal, who betrayed and killed her parents when she was just a child. She consults with another sorcerer, who reveals that, although Derramal has been dismembered and his body-parts scattered across the world, he still lives. The only way to kill him, she is told (and also rescue her long-lost brother) is to re-assemble Derramal’s body.

Demon In The Mirror is a typical questing tale, with Tiana traveling from location to location, collecting the dismembered parts of Derramal, piecing together the mystery of the Demon In The Mirror, and battling unwholesome fiends, and minions of other sorcerers that block her way. Unsurprisingly, considering Offutt’s penchant for erotic fantasy, Tiana is captured more than a few times and is bound and staked out, naked and in full presentation, as an offering to fell beasts and lustful antagonists. As is to be expected in such tales, she always slips her bonds, through skill, wit or guile, just in time to turn the tables on her adversaries.

I promised, of course, to review the Appendix N books, not as literature, but as resources for developing your own fantasy adventures. As a resource, Demon In The Mirror is a gold-mine. You have nun-turned-vampire-infested chapels, magic mirrors, tricks and traps aplenty, ghoul-overrun tombs, were-beasts, deadly animated gardens, foul bat-demons, magical flying armor, shadows killed only with shadow-weapons, islands overrun with illusion-creating spiders, bands of forest bandits, treasures described in luscious detail, and epic battles won by magic and strategy.

I have it as much for the cover as anything.

I did just read what is likely the last Tiana Highrider story in the "Rage of the Behemoth" anthology by Rogue Blades Entertainment and while irritated with Offuts prose through the first 25% grew to kinda like it by the last half.

I'd be interested to know how many other Tiana Highrider stories are there, beyond the three books in the WotW trilogy.

I'm a sucker for Vallejo artwork!

I have this book, but havne't read it, as yet. Your review makes me want to move it up a few places in my "to read" queue.

Offutt is a bit of a hack but his stuff is generally entertaining (and I like it better than, say, Jakes barbarian stuff). Just stay away from Offutt's Bran Mak Morn tale "For the Witch of the Mists". One of the worst books I've ever read, period, for any genre, and one of the only books I've tossed in the trash after finishing...

I can't say that i've ever trashed a book upon completing it, though there are several books I never finished for lack of interest.