How Do You Roll? 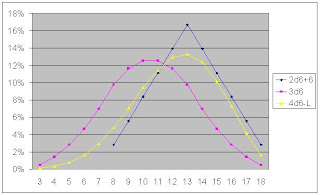 As you well know, i'm a big fan of the straight "3d6 in order" method of character generation. However, I've also been involved in games where the "4d6 drop the lowest" and "2d6+6" methods were employed.
I was sitting here thinking about the distribution of ability scores that are generated using those three methods and thought, why don't I publish a chart to graphically illustrate the differences?
Here are the fruits of my labours. As you can see, the 2d6+6 method generates the most attractive sets of ability scores (from the players' perspectives), as they can never generate a score of less than 8, and have the greatest chance of generating an 18.
Posted by Aaron E. Steele at 7:37 PM

It's nice to see these graphically presented for ease of comparison.

I've always used the '4d6 drop the lowest' method for all but my earliest games. It might be nice to go back to the straight '3d6 in order' method. Bell curves are so nice and symmetrical.

I've never been a fan of the straight 3d6 method due to the relative propensity for really low scores. If 10 is human average, it seems strange that people with debilitating ability scores might take up a dangerous life of adventure. It's weird enough that these people would have survived to adulthood in such a hostile world. But I'm the wrong person to offer my opinion on this, since I'm not much of a fan of random character generation in general (except for one-shots). When we did use random rolls, it was always the "4d6 drop the lowest" method. I do like that 2d6+6 method, though. It looks like it produces the right values for people that have what it takes to be adventurers.

YMMV, of course. And I do remember an excellent an long-running game of Warhammer FRP 1e where all characters were randomly generated.

FIRST selecting your character’s race and class
THEN generate your ability scores in order; roll 4d6 for each, retaining the highest three die results.
When generating the primary ability score add +2 to the final result for that ability score (only).

When rolling the dice, depending on the character’s species, he must reroll either all ‘1s’ or ‘6s’ for the individual die results when generating specific ability scores. This reflects the unique aptitudes of the individual races.

Every GM designs his world different; in my campaign for example

dwarves rerolls 1s on CON, but reroll 6s on DEX

halflings reroll 1s on WIS, but reroll 6s on STR

half-elves reroll 1s on CHA, but reroll 6s on WIS

I like the inclusion of barbarians and sorcerers, though I use Cha for psionicists rather than sorcerers

I've always used the 4d6 drop the lowest method. I find it gives a pretty balanced set of ability scores.

straight 3d6 here. the minor penalties/bonuses in S&W:C that we run makes it not a big deal. results of a poll I ran a while back here might interest you. As a player, my DM uses 4d6 drop the lowest though.

I used to use the straight 3d6, three tries and the best try was the character. No moving stats around. No dump stats. I've since discovered the Dragonsfoot 1e character generator, which gives a number of different methods. Instinctively, I still go for that method.

Really, rolling up the stats and then deciding on the class forces the player to be creative with what they've got. Anything that tampers with what the dice decide starts to smack of character building rather than rolling up. I've never gone into a rolling-up session thinking "I want to play (specific class), therefore my scores must be adjusted so that I can do that." Also, someone who's always had a magic user might find that they actually kind of like playing a thief once the shock of rolling one has worn off.

Another thing that I've always liked about the earlier editions (Basic, Original, 1e) is that there's no room for min-maxing. We make a big thing in the OSR about the speed of character creation and anything that adds to the time taken to roll up a character seems to be shooting ourselves in the foot.

I also always used 4d6 drop the lowest, and put it in any order you want.

Daddy Grognard said...
Really, rolling up the stats and then deciding on the class forces the player to be creative with what they've got. Anything that tampers with what the dice decide starts to smack of character building rather than rolling up. I've never gone into a rolling-up session thinking "I want to play (specific class), therefore my scores must be adjusted so that I can do that." Also, someone who's always had a magic user might find that they actually kind of like playing a thief once the shock of rolling one has worn off.

I've become really disenchanted with "character-building." During my 3E years I favoured the point-buy method, which inevitably results in min-maxing; consequently the entire party always had an 8 Charisma except in those rare occasions when a bard or paladin was played. Every fighter was built exactly the same way, every wizard, etc. Tedious.

Forcing a player to play outside his comfort zone has some real benefits. One of my players, who has ALWAYS played a ranger and nothing but, recently was forced to play a cleric. He was brilliant - probably the best played cleric I've ever seen, and he had a blast. He's now expanding his horizons and trying other characters and is a much more active and involved player now that he's out of the rut he didn't even know he was in.

Truth be told, I just let people put in whatever they want. If they want all 18s? If that's what they need to enjoy their character, then whatever... In the long run, it doesn't make a whole lot of difference.

Of course, the group I play with is all very mature. If the character they have in mind is weak, they'll take low scores. It's all about what you want, and instead of rolling over and over until there's something you're okay with, might as well just plug em in.

Thanks for that perspective Matt. I understand where it comes from.

How can you tell I graduated from the Social Sciences...

I wonder too if a "round-robin" approach to establishing character abilities/powers would have any sort of predictable result (given no awareness of who plays which class).