Don’t ask me what you need to hit. Just roll the die and I will let you know. 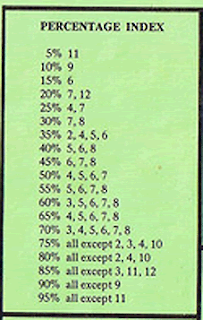 Tavis Allison and Cyclopeatron are musing about whether or not to reveal the target numbers for successful melee attacks to their players.

Dave Arneson has an oft-quoted saying: "Don’t ask me what you need to hit. Just roll the die and I will let you know." Essentially, Dave was advocating for keeping as much of the game mechanics off-stage as possible, thus allowing the players to immerse themselves in their characters and the world, rather than meta-gaming, or tailoring their play to the game mechanics.

While I concur with Dave's approach, and have been a vocal proponent of keeping much of the in-game mechanics behind the DM screen, both Tavis and Cyclopeatron make compelling arguments for (sometimes) revealing the to-hit numbers to the players.

The attached 'Percentage Index' table has been sitting on my computer desktop for several months. I think I came across it in one of my visits to the Original Dungeons and Dragons discussion boards. It seems rather Arnesian: rumor has it that, before the d10 and d20 became widely available, probability tables were constructed using the available dice-of-the-day, d6's. The above table allows you to calculate a d20/percentage probability from a throw of 2d6.

Dave Arneson was reportedly a fan of percentage systems. In my mind, I imagine this probability table hanging from Dave Arneson's DM screen, via a paper-clip, and, after calculating the percentage chance to hit, Dave peers over his screen and is saying, "Don’t ask me what you need to hit. Just roll the die and I will let you know."
Posted by Aaron E. Steele at 8:29 PM

I guess I'm in the in-between place, because absolutely under no circumstances do I ever reveal the exact to hit number or AC of an opponent. That said, I like to have the to hit AC/AAC numbers on the PC cards. Soo, if the players are even half-paying attention, they'll figure it out. I like this arrangement though - the players think they're gaming me maybe, and I don't really care. It's a way in which (esp. at our low level games) they can high tail it based on what they're seeing with the dice without necessarily immediately knowing specific tactical information in an encounter.

I think many of the advantages of keeping the mechanics behind the screen were particularly important to Arneson because of the background he and his players were coming from. The wargaming group he and Wesely started with was using a Prussian kriegspiel, badly translated and of incredible complexity; eventually the two Daves figured out that what the guys in that group really liked to do was argue about the rules. The Napoleonic campaigns out of which Braunstein and Blackmoor grew used a referee to achieve multiple aims:

1- avoiding rules disputes by having authority centered in one neutral party
2- promoting immersion & avoiding rules lawyering by forcing players to focus on their intended actions to interact with the imagined situation, rather than gaming the rules
3- allowing the rules to be complex because only the referee would have to know them
4- allowing the rules to be flexible in different situations and adapted over time because the players wouldn't be invested in knowing how things "ought to work"

As you point out, the mind-curdling process of using 2d6 to generate percentiles is an example of #3, and the difficulty of reconstructing exactly what Arneson was doing we've seen on the OD&D boards is due in large part to #4 -the rules he used were always in flux.

I think this is a good example of how the focus on studying the details what the originators of roleplaying were doing is the exact opposite of the kind of slavish conservatism critics attribute to the OSR. Without that kind of research, you either have to blindly accept or equally blindly reject the "don't ask me what to roll to hit" maxim - but through serious engagement with the history you can see why Arneson took that stance and decide whether the circumstances that made it right for him are also true for you.
- Tavis

Rules-on-a-need-to-know-basis goes against my grain, though. We are playing a *game*, after all, and all the players of a game should know its rules. The whole "tell me what you want to do and I'll tell you if you can do it" approach is an invitation to fudge, when it isn't simply GM dickery.

I recall reading an interview with Bob Bledsaw from years and years ago... Bob relates a story of running a D&D game at a con and getting a horrified reaction from Gygax when the Gary saw Bob rolling his dice RIGHT OUT IN THE OPEN, IN FRONT OF THE PLAYERS...! : )

I admit to having mixed feelings on the subject. On the one hand, it is a game and you want players to be able to make decisions based on possible outcomes... in one way, asking the players to simply roll and hope is asking them to play with one hand tied behind their backs. Thinking about it abstractly, an experienced fighter might be able to tell if the person he/she is fighting with is evading or blocking attacks easily and might gain insight into the level of abilities of the opponent.
On the other hand, if the players are asking NPCs things like, "If you were to strike at an unarmored man of average agility 100 times, how many times, expressed as a percentage, would you hit him?" then perhaps we have gone too far the other way...
I was a player in one game where nearly everything took place behind the screen. One of the things that made this frustrating for me (as a player) is that I didn't gain the sense that we (as players) had a chance to influence the course of events very much... we were just passengers on the bus rather than participants in the creation of the 'narrative' of events that made up the game. Perhaps if there had been more transparency in how in game decisions were adjudicated, I would have felt differently.

Great post! I find it interesting how the conflict between rules lawyers and those who just want to play has been going on since forever... :)

Thanks to all of you for some very meaty comments.

Ze bulette: I think you've cut to the heart of the matter: tension between immediate vs. emergent knowledge; difference between cerebral vs. emotional game sessions. I don't think there is a correct answer here, both immediate/emotional and emergent/cerebral game experiences have their advantages.

Dave: I think there's room for both approaches, regardless of Gary's faux-horror. Pat Armstrong (Ode To Black Dougal), who I consider an excellent DM, rolls in the open: as a DM, I roll behind the screen. I understand your comment about it being a game/simulation. I also think that it is sometimes fun to learn the rules of the simulation through 'emergent' experience, (see Tavis example of the Outdoor Club game) just as real-life rules are sometimes learned through real-life experience. There is room in the tent for both approaches. At my table, the simulation mechanics are off-stage, and are either common-sensical (things fall if dropped) or learned through interaction with the game world (vampires are killed by sunlight).

Limpey: I do think that the DM should communicate some information to the players. For example, a player says, "i'm thinking of jumping across the chasm". The DM should either handwave the jump's success, or give the player enough information to roughly gauge his chances BEFORE he jumps.

Havard: as a reformed rules-lawyer (didn't most of us go through that stage at one time or another?) I understand the appeal. Knowledge of the game rules is an absolute necessity when you can't trust the DM to be impartial. While I don't subscribe to the 'balanced encounters' school, I do think DMs have a responsibility to drop hints about fatal courses of action.

In the name of keeping as much work off myself as possible, I tell the players the AC and they often can figure out what they need.

That is one advantage of rules transparency: less work for the already overburdened DM!