Dave Trampier And Emirikol The Chaotic 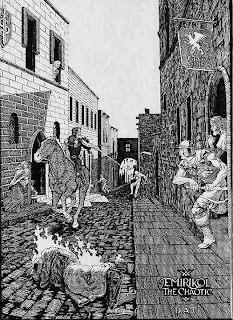 Yesterday, I posted the stats for Emirikol the Chaotic, who makes an appearance in the 1998 Monte Cooke AD&D 2E adventure, A Paladin In Hell.

Emirikol is the much-beloved creation of illustrator David Trampier. Trampier, affectionately known as 'Tramp' by many of the older roleplayers, is an illustrator who, along with Erol Otus and David Sutherland, defined the look of early Dungeons and Dragons. Here is Tramp's Emirikol the Chaotic as he appears on page 193 of the 1979 AD&D Dungeon Masters Guide.
Tramp was well-known for utilizing "implied narrative" in his illustrations. He captures a moment in a story, already in progress, and he leaves it up to us, the viewers, to piece the rest of the story together. The subjects in his illustrations are rarely inert: even when pausing, they have a certain energy or tension to them. Look at any of his illustrations and you will see what I mean: even his crouching lizardman, from the Monster Manual, looks ready to spring to the attack.
Posted by Aaron E. Steele at 12:16 AM

I think that if I had to pick one illustration that completely and utterly summed up D&D for me, it'd be either this one or the one on p104 of the Monster Manual (also by Tramp).

I played with a guy way back who took Emirikol as his role model and basically played him as character after character. Just glad we were on his side rather than the guys racing out of the tavern.

I liked this pic so much that the Green Griffin pictured here became the tavern for "you meet in a tavern" in my campaign.

As a DM, I had him statted up. Just for the heck of it. And the illo inspired an adventure. And my PCs met him. They didn't die, but they finished the adventure with that "I hate that guy" vibe that I was looking for. They hated Emerikol, not me. They had such a good time it became the subject of in-jokes for years to come.

Word Verification: goutzess...Kinda like a giantess, only with twisted, reddish skin. Pillages towns all the time because she is mad with pain.

Great picture, and great artist but Otus was always the defining artist for me when it comes to early D&D.

This is probably my favourite D&D picture of all time (although Otus's cover for the 'Expert' rulebook comes close).

Great pic. I really should scan it, print it and frame it so that I could see it more often. Super inspirational to me as a player and DM.

That's my favorite bit of D&D art ever. It is a marvel.

Trampier drew this image from a real-world location. There may not be a Green Griffon tavern there, but you can visit it if you are ever in the city of Rhodes in Greece.

This is the Street of the Knights in the old town section of Rhodes and it looks much like it did in medieval times.

I have never found a photo online that exactly replicates the angle of the Emirikol image (there aren't enough die-hard, old school D&D fans visiting Greece, I guess). The two images in the links above are pretty close, though. You see the same arched doorway on the left side of the street and the boxy window on the "bridge" going over the street. From what I understand, Tramp found a photo of the street in a book about Greece.