Appendix N: The Bells Of Shoredan 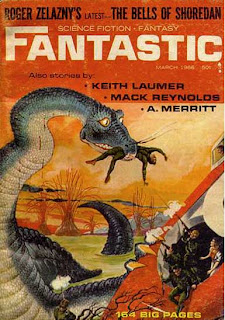 Roger Zelazny is probably best known (in Dungeons and Dragons circles) for his Amber series and Jack of Shadows novel, as both are referenced in Appendix N of the 1979 Advanced D&D Dungeon Masters Guide.

Dilvish is a half-elf, imprisoned and tortured in Hell for two hundred years. His nemesis is Jelerak, a fallen white wizard who is the author of Dilvish's hellbound imprisonment. Dilvish escapes from Hell, and vows to exact revenge. Accompanying him in his escape and subsequent quest is his new-found mount and companion, a Nightmare that Dilvish names Black.

The Bells of Shoredan originally appears in Fantastic Magazine, March 1966, and is reprinted in Warlocks and Warriors, an anthology of heroic fantasy edited by L. Sprague de Camp and published in 1970, which I obtained at a recent book sale. In 1982, this tale was also published in a Dilvish The Damned anthology of 11 short stories.

In The Bells Of Shoredan, Dilvish and his allies are besieged, and it is up to Dilvish to evade the besiegers and raise a supernatural army. To do so, he must ride to the ruins of an ancient fortress and ring the Bells of Shoredan, which will call forth an undead army.

The fortress is the scene of Dilvish's great-grandfather's death: here he slew the King of the World using the Invisible Blade, before falling himself. It is also the place where the white wizard Jelerak contested with, and was corrupted by, the infernal powers. Now, Dilvish must enter the fortress and ring the bells, for it is foretold that only the blood of him who killed the King of World can awaken the army of the damned. In a ironic twist, joining and aiding Dilvish is a priest loyal to Jelerak!

Dilvish and the priest explore the fortress, and Dilvish battles the same fiend who corrupted Jelerak. Just as it appears that Dilvish will succumb to the demon, the priest distracts the demon, and Dilvish finds the Invisible Blade and slays it. He then rings the bells and calls forth his troops.

What makes this otherwise average tale enjoyable is Zelazny's prose and the melancholy mood, as the priest and Dilvish part company without any resolution to their conflicting allegiances and goals. A fun and brisk read.
Posted by Aaron E. Steele at 8:08 PM

I picked up a HC BCE edition of the Dilvish anthology at a thrift store, not too long ago. Haven't read it yet, but I'm kinda looking forward to it.

I'll be interested to read your thoughts of the book. We have a well-stocked second-hand bookstore in Calgary, which I hope to visit and obtain a copy of Dilvish the Damned and The Changing Land.

Madwand fits into this, too, doesn't it? I just saw that one at a local used bookstore while I was looking for some Gene Wolf stuff. No luck on that front, so I'm thinking, especially after reading your recent post here, that I'd like to go back and read some more Zelazny. It's been years. Probably long overdue. Dilvish sounds interesting...

Changeling and Madwand aren't related to the Dilvish stories, AFAICT. Magic was described similarly in both sets of stories, though (as well as in the second Amber series).