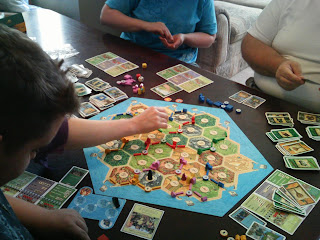 We made a day of it: first to see the new Toy Story 3 movie with some friends and their son, then back home for a bite of supper and a game of Settlers of Catan.

Once again, our luck failed us and we were beaten by Pamela (who was playing the pink pieces) but, as usual, only a few points separated us from the winner.

I enjoy our games of Settlers of Catan. It has a little D&D endgame vibe to it, as each of the participants play a Prince (or Princess) of Catan, competing with each other to grow the largest and most successful principality. If only it had some army-to-army combat rules, it might be a fast-playing empire-building system for D&D. The economics are admittedly oversimplified, but that's what makes it such a quick game to play.

terrific game! Add exploration by adding Seafarers of Catan, or Defend your lands against barbarians by adding Cities & Knights of Catan. I agree some PvP would kick this baby up a few rungs in my book too!

Settlers is a great game. Sounds like a fantastic day!

That's a great game and a great day! Might I suggest grafting on some of the rules from Risk, perhaps even including the military units from Risk occupying the hexes alongside the settlers? ;-)

I have only played it once but I seem to remember having a good time.

Settlers is a wonderful game and we've had lots of fun teaching it to (non-gaming) friends. We're up to 12 converts so far!

As they say, Settlers is a good "gateway" game, into the larger realm of Eurogames.

That's a great game and a great day! Might I suggest grafting on some of the rules from Risk, perhaps even including the military units from Risk occupying the hexes alongside the settlers? ;-)

Good suggestion Mark. My latest thinking is to allow the "knights" from the Cities and Knights expansion to fight each other, destroy roads, fortifications, towns and cities. Since the game is really about empire building, not combat, I was only going to allow players with the same or few victory points to attack another player. That way you don't have the stronger players wiping out the weaker ones.

I'm just worried that adding combat will unnecessarily bog the game down.