ODnD And Its Progeny 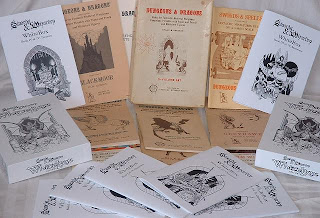 I was quite pleased to see that my second Swords & Wizardry Whitebox arrived in the mail several days ago. It was accompanied by five extra S&W Character books. That gives me seven Character books and two Spell books for players to share. I had ordered the extra Whitebox on the off-chance (subsequently confirmed) that my 11-year old son would be intrigued and want to read and have these rules manuals for himself.

Indeed, I found him immersed in the Monster book on Thursday evening, so I think his interest has been piqued!

We're off to the properties for a couple of weeks in July. There are eight cabins owned by our extended family, on the Shuswap Lake, all within a 5-minute walk of each other, and most of his D&D-playing cousins and aunts and uncles will be around. Having the extra books will be a boon, as i'm trying to wean my extended family off of the later editions of D&D.

I will also bring along the ODnD Collectors Edition ruleset and supplements, which is the parent of the new Swords & Wizardry Whitebox. This is sure to act as further inducement to join in our little old-school D&D games: who doesn't love leafing through these old booklets while you're waiting for your turn to roll-to-hit!
Posted by Aaron E. Steele at 2:53 PM

This is very cool. If only I had a family that was into roleplaying games... Have fun at the cabin!

One of the best things about the new S&W whitebox is that you can buy extra copies of the individual books for very little money. Have fun playing with your family! We had a big family D&D game last Thanksgiving and it was really fun!

Best of luck with the S&W insurrection! I'm just in the process of switching my campaign over to S&W.

What kind of snacks is the grandmother supposed to supply to the players and dungeon master.

Whatever the cousins and kids want, of course, though I believe Mountain Dew and Cheetos is traditional for D&D games.

I'd like to pull off S&S (I have the white box as well), but I'm finding it very hard to breakaway from 1E. :)

I'm envious on so many levels. Enjoy your time away.

I'm hoping to have computer access while at the cabin, so I can blog the game summaries.