I'm cheating just a bit here, putting the above image and the magic user spell, Fumble, together.  The preceding Sutherland illustration appears on page 11 of the ADnD Players Handbook, while the Fumble spell description appears on page 77.  Combining them in this post helps highlight an important feature of early versions of Dungeons and Dragons: humor. 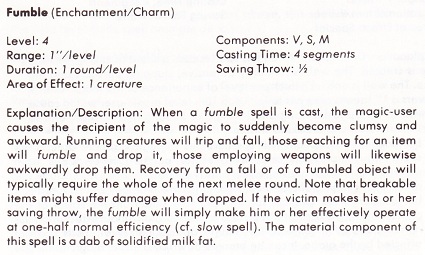 I've already spent some time on this blog discussing the illustrations of Will McLean.  Will McLean's cartoons graced the pages of the 1979 Dungeon Masters Guide and early Dragon Magazines.  His style of humor was welcome tonic to the too-serious arguments over rules minutia that occurred during Dungeons and Dragon's early development.

What I like most about the preceding Sutherland illustration is the great contradiction inherent in the barbarian's fall: did he truly slip on a banana-peel, and if so, what is the point of the spell-casting wizard's inclusion in the cartoon?  Or did the spell-caster just recently summon the monkey which ate the banana and dropped the peel, which the barbarian then slipped on?
Posted by Aaron E. Steele at 8:17 PM

Perhaps the magic user summoned the barbarian to amuse his monkey?

Something I never contemplated...

Absolutely two thumbs up for humor in D&D. Slapstick and otherwise. Now I did play in one game where it went too far, I thought. But I'd rather play with a little too much humor than none.

Barbarian and wizard are together trying to kill the monkey, which is a monster in the dungeon. Wizard declared a Lightning Bolt, Barbarian declared a melee attack.

Barbarian slipped on the monkey's banana peel because he failed a DEX check on approach. His attack goes awry (roll 1d8 for direction, clockwise from 1 = monkey) and goes straight for the M-U.

Will the M-U get his spell off before the Barbarian's sword slices him and ruins it? If it does, he'll probably fry his Barbarian friend with it too!

why wait to 7th level spell caster to let the fun begin?

Fuumble should be a 1st level spell and target is allowed a saving throw . .. .

Sometimes its hard to figure why spells were placed in certain level lists.