You're So Vain, You Probably Think This Blog Is About You 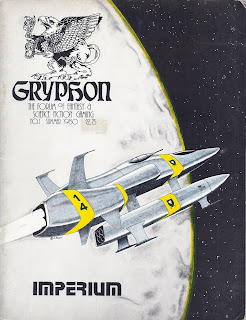 An excerpt from an interview between Rudy Kraft and Gary Gygax, appearing in Gryphon Magazine, Issue No. 1, Summer 1980:

Gygax: I probably have articulated this a number of times. I basically think that it's a very low form of vanity press. They needn't necessarily be that way but people who can't get anybody else to publish what they write can always type it up and send it in themselves and therefore get up on their soapbox. I think it has about as much validity as someone standing up on a soapbox in a public square and talking about whatever they feel like talking about. The concept of APA's is a relatively interesting one which could be quite valuable to the creative gaming community; whether they were creative as players or as authors and designers is immaterial. I'm not sure what the overall effect has been, frankly, but in my own judgement I think it's been rather a waste of everybody's reading time. At one point, I took Dave Berman to task about his amateur publication called "The Apprentice" out of Canada because in my opinion it was a really bad magazine. He recently sent me a copy of a newer issue and it was superb. It is verging on the professional side. It is what you call semi-pro right now. He picked up the gauntlet when I tossed it down and whacked me across the face with it, so to speak. He benefits. I benefit because it was a good magazine. It was well worth reading and the hobby benefits.

Kraft: So you're not against all APA's, just the bad ones.

Gygax: Basically true. The problem is that I have only seen a couple of them. The idea is fine. In application it hasn't been working out very well.

Kraft: What would need to be done to make it work better?

Gygax: I know that in theory an APA provides everybody with a chance to say whatever they like. However, having a little more editorial control to make it something that is a little more useful would probably not only benefit the readers but also expand the readership. An APA which is filled with cross-talk saying, "Gee, I like your ideas, Bozo, but on page 39 you make this error" and a lot of other banal cross-talk and chatter and then some ridiculous propositions or suppositions regarding this, that, or the other thing are a waste of the reader's time. To have to wade through 70 or 100 pages of oft-times badly written material in order to find one or two good ideas is rather counter-productive to the interested individual. They would be a dandy training ground for the creative people if there was a little more editorial control over them.

I don't subscribe to the above arguments, particularly as regards the blogoverse. Participation in the OSR blogging community should be encouraged, as it provides a low-cost way of soliciting feedback, making suggestions, sharing alternatives, promoting role-playing, and, yes, hawking one's wares.

The problem of editorial control in the OSR is that every editor is biased, and can make mistakes. Once you put someone in charge of being the gate-keeper for the OSR, that will inevitably lead to the culling of ideas, approaches and products that might otherwise develop into the next big thing.

I hear complaints that much of what is being churned out by OSR bloggers amounts to white noise, self-promotion and navel-gazing. Well, you know what? Democracy is noisy, too. Yes, having to wade through the output of 400+ bloggers (and growing) is a challenge. But if the alternative is having someone else tell me how to play, who is worthy of attention, and what official tools to use, i'll stick with the current OSR blogging community model.
Posted by Aaron E. Steele at 4:05 PM

I hear patriotic music playing! A hearty agreement from me! Let there always be a small OSR government! Power to the people is always the way to go!

Ask not what the OSR can do for you, ask what you can do for the OSR!

The summer blogger and sunshine gamer will shrink in this time of crisis...

"Once you put someone in charge of being the gate-keeper for the OSR, that will inevitably lead to the culling of ideas, approaches and products that might otherwise develop into the next big thing."

Creativity often falls victim to someone wanting consistency. Thanks for the post.

DRANCE said...
I hear patriotic music playing! A hearty agreement from me! Let there always be a small OSR government! Power to the people is always the way to go!

I'll see what I can do to supply a soundtrack next time!

Games Workshop picked that mentality up and ran with it big time. Pity it killed a huge chunk of the gaming community dead in the process...

> more EGG:
> To have to wade through 70 or 100 pages of oft-times badly written material in order to find one or two good ideas is rather counter-productive to the interested individual.

aside: No APA was /ever/ that "low quality" on the signal to noise ratio. Having a few weeks to think about your contribution certainly helped and as for feedback/discussion on other contributions that's a different kettle of fish APA-side to a "blink and you've missed it" blog.

A good article from which to draw comparisons, agreed: "traditional" online fora and other channels also play their part, of course.

Tenkar said...
Blogging from the people, for the people!

We hold these truths to be self-evident: that all bloggers are created equal.

I basically think that it's a very low form of vanity press. ........ people who can't get anybody else to publish what they write can always type it up and send it in themselves and therefore get up on their soapbox.

I seem to recall somebody couldn't get his game published in 1974 and published it himself (basically).

If Gygax weren't such a remarkable logorrheic himself those remarks would have been easier to take.

"To have to wade through 70 or 100 pages of oft-times badly written material in order to find one or two good ideas is rather counter-productive to the interested individual."

The irony is delicious.

Do I detect a Ned's Atomic Dustbin reference?

@Bigby: I did literally LOL, although I found Gygax's purple prose to be an amusing read at least. That was worth the price of admission. It's probably why it is still read and analyzed today, at least by us grognards.

I found Gygax's admonitions to be rather mean, at times, like he was offended at someone's comments about D&D. Yet Dragon Magazine itself was very much like he described, filled with "cross-talk" (a letters column) and "propositions or suppositions regarding" D&D and other games.

It seems as if Dave Arneson, the godfather of gaming *before* D&D, was much more open to new ideas. Holmes' blue book was sprinkled with suggestions that D&D should be taken in different directions.

All that being said, it's really 20/20 hindsight. The man's gone, living on in our memories. Everyone can be taken to task for something they've said in the past. In the end, Gygax was glad so many people had fun with something he pioneered. And that's the thing we all need to take away from this.

And Mr. BLH is right on with the DMG! I may have said this somewhere before, but the layout of the thing ... it's either disorganized or anti-organized. Depends on what intentions you ascribe to the author that day.

But, if you took each little piece as a single post, cover to cover, and made it a blog (where no one expects linearity) we would see it as the work of a genius. DMG as blog is a better format that DMG as a tome, in my opinion.

Thinking on editorial control, I asked in a poll for the Links to Wisdom wiki, if it should be policed for quality.

The overwhelming vote was NO
http://jovialpriest.blogspot.com/2011/04/links-to-wisdom-wiki-poll-results-are.html

It's why those of us who have been maintaining the wiki, don't delete any links.

I agree wholeheartedly -- democratic power to the people!

And I would echo the idea that the DMG is a bloody mess, organizationally.

Yup, welcome to Gygax the publisher: the man who brought the ultimate DIY game tool to the public, then had to develop it into a brand or fire everyone who'd made it a commercial reality. I don't blame him.

And filtering for Sturgeon's Law is much easier in the blogoverse than in print: if you find a good writer you follow them. Many followers doesn't necessarily translate to superior content, but it's an indicator. I can easily see why EGG might have been discouraged by some of the fanzines back in the 70s.

Man, I'm imaging if an editor got ahold of my gaming "work" (shudder).