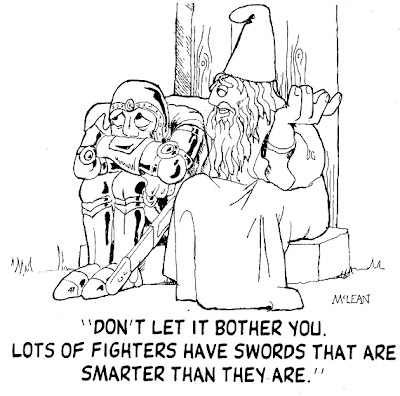 "Among magic weaponry, SWORDS ALONE possess certain human (and superhuman) attributes. Swords have alignment (lawful, neutral or chaotic), an intelligence factor, and an egoism rating (as well as an optional determination of their origin/purpose). These determinations are made as follows:" - Original Dungeons and Dragons, Book 2, Monsters & Treasure, page 27-28

Another feature of old-school Dungeons and Dragons that has been lost along the way: Intelligent Swords.
The possession of an intelligent sword was a mixed blessing. On the one hand, you had a powerful sword, with extra abilities that benefitted yourself and your party. On the other hand, there was the possibility of a battle of wills between the sword's possessor and the sword itself.
In ODnD, swords with an intelligence of 7 or greater also had an egoism factor. The egoism factor was the will of the sword. Swords with high intelligence and high egoism had a chance of dominating the possessor, thereby subverting the will of the player to pursue his own objectives. For example, a dominating sword might demand that the possessor encrust it with rare gems and beautiful filigree, fight certain monsters, surrender itself to another more worthy fighter, or mount a quest in keeping with the sword's purpose.
Considering the potential battle of wills between the player and the magic sword, some may wonder whether the advantages outweighed the drawbacks. It should be understood that an ODnD magical sword, possessing the same bonus, was more powerful than those of later editions. See my earlier post on magic swords for a further explanation. Because the advantages of magic swords were considerable, and because many players relished the challenge of owning an intelligent and willful sword, I don't recall an instances where intelligent swords were not retained by the player.
Posted by Aaron E. Steele at 1:48 PM

I was always rather fond of early Warhammer's Daemon Weapons, in a similar sense - powerful, strange, wilful, and with their own malevolent goals and corrupting influences, yet somehow more interesting than a mere cursed item, something without benefit that you'd just want to be rid of.

"Willingly you picked me up - your first mistake. Willingly you drew me - your second mistake. I do not allow my servants to make three mistakes..."

In my youth I was less enamoured of demonic-weapons and magic. Now i'm with you ... I like the idea of magic as a mixed blessing.

Wish I was more familiar with Warhammer. I picked up a used WFRP gamebook recently, but havn't had a chance to immerse myself as of yet.

I loved using intelligent swords in my old D&D games. They were often around for a long time, before the sword's annoying personality got the characters into trouble.

I wonder how it would change the game if one of the other players roleplayed the personality of the sword...

Daniel Boggs (of Dragons at Dawn fame) makes an interesting observation that the magical sword rules came, almost word for word, from Dave Arneson's pre-D&D Blackmoor game. In that game, Ego was one of the base ability scores. That little aspect of his game survived intact all the way to the 90s in the Rules Cyclopedia (after being abandoned by AD&D)

There was a french RPG called Bloodlust where your character was a magical item and you played the game from it's perspective trying to find a wielder to help you achieve your goals.