Dragon Mirth And The TPK 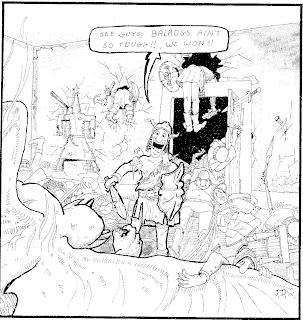 Even as far back as 1980, the Total Party Kill, or TPK, was a regular feature of many a Dungeons and Dragons game session. This cartoon, of a near-TPK, appears in the Dragon Mirth section of the March 1980 Dragon Magazine.

It is illustrated by one JD Webster, who also illustrated the Finieous Fingers cartoon series. The central character in this particular cartoon looks eerily like a fighting-man clone of Finieous. Behind the surviving fighting-man are 12 fellow adventurers, all dispatched by the same Balrog the fighting-man is referring to.

Since it seems unlikely that the DnD group consisted of 12 players, some or all of these dead party members must be henchmen or hirelings.

My favorite corpse is the Magic-User, plastered against the far wall.
Posted by Aaron E. Steele at 7:58 PM

I love that wizard, too. I also dig the guy holding onto the doorknob, as if he died while trying to flee.

In my 29 years of gaming I've only presided over one TPK. It was so unexpected. A simple encounter with a few orcs with white hot dice. We were all stunned as the outclassed orcs managed to butcher the party.

@Tenkar ... my sweet-spot is roughly 7 players, above that, the players get too little time in the spotlight.

@Christian ... there's something deflating about a TPK. When it happens while i'm DMing, I take it as a personal failure. The dice gods were not with your players that night.

Someday soon I hope to get into some good old fashioned dungeon crawling, using Labyrinth Lord for rules. I intend to let the die fall where they may, and this may result in my first TPK (one can dream)! Not that I fudge dice in my other games I run. Rather, I'm more of a damage fudging type. I may hit you, but the hit point loss may be lower than the dice may suggest.

When I first got into D&D I played in a game at the local library with kids 2-3 years older than me. That group had to have been around 10 players. It was very chaotic.

I'm running Stonehell using Labyrinth Lord for a group that mostly cut their teeth on third edition. I let them know in advance that there would be no coddling, and we had one TPK and a couple of near-TPK encounters in the first few sessions before they finally (recently) seem to have gotten their feet under them with regard to the required approach.

In my 3rd edition game I might think about what I did to contribute to a TPK and alter my behavior in the future, but in a sandbox/megadungeon old school style game, a good bit of the tension and drama is lost if the possibility isn't at least there all the time.

What is interesting is that JD Webster went on to design several tactical level jet and WW II era board games (Air Superiority, Air Strike, Rise of the Luftwaffe, Actung! Spitfire, Whistling Death) and is still active in that community now (as am I).

For whatever reason, I have two Finieous Treasuries.

For some issues of Dragon, the comics were the standout feature. As you might surmise, I was not always impressed with the "content" of Dragon.