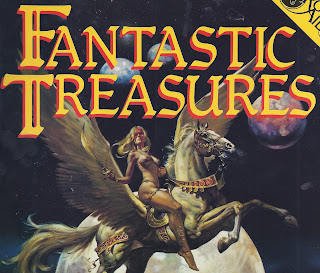 Fantastic Treasures is a two volume catalogue of magical and mythological items from folklore and legend, printed in 1984 by Mayfair Games, under its Role Aids line of gaming supplements. Role Aids is an uneven line of supplements, with adventures like Evil Ruins and Lich Lords (both are decent) interspersed with less stellar fare.

The Fantastic Treasures catalogue includes several hundred magical items, each one paired to a black and white illustration. Even though Fantastic Treasures is, by definition, derivative, since it uses myth and folklore for its inspiration, it is the presentation of this catalogue that I find appealing. And i'm not just talking about the Boris Vallejo art that graces its two covers. 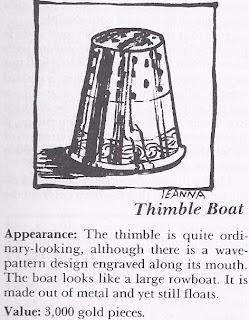 Paging through the AD&D Monster Manual, you will find most D&D monster descriptions accompanied by an illustration. That is never the case for magic items in the Dungeon Masters Guide. I can recall poring over the 1979 DMG, bewildered by such unfamiliar items as censers, periapts, phylacteries, and scarabs. Without an illustration, and therefore a mental image to draw upon, I found it difficult to describe those magical items to the players.

In contrast, each of the magical items described in Fantastic Treasures is accompanied by an illustration. Admittedly, unlike the mysterious periapts or a phylacteries, I don't need illustrations of thimbles, horseshoes, or boots, to visualize or describe those items. But there is something immediate and meaningful about seeing an artist's depiction of an item, even if you don't end up describing it as illustrated. 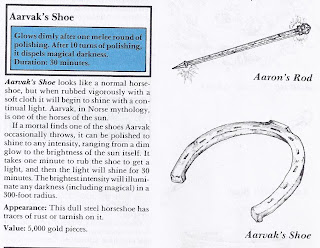 While some of you will be familiar with a broad cross-section of myth and folklore, you are bound to find several items in the Fantastic Treasures catalogue that are new to you. The usual suspects are included of course, like cloaks of invisibility, magical pendants and gems, musical instruments and the like, from Greek, Norse, Chinese legends. But some interesting and obscure African, Indian and frontier American items are also included: Paul Bunyon's Axe, anyone? 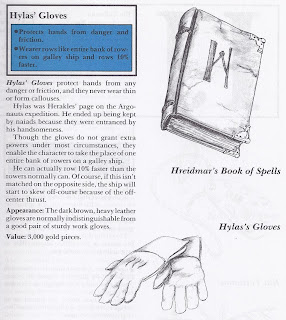 Perhaps I am drawn to this catalogue due to my own interest in the development of generic item and treasure cards. I appreciate these economical magical item descriptions, paired with perfectly serviceable illustrations. If only they came in card form! 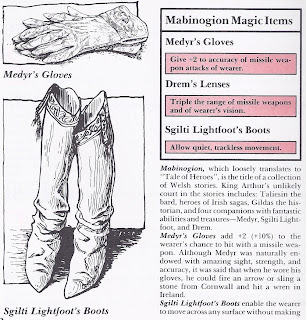 Fantastic Treasures is a one of those gaming supplements that does something just a little bit different. While i've seen other magical item gaming supplements that claim to provide fresh magic items, few of their entries are accompanied by illustrations, and few items are truly campaign-ready, unlike the tried-and-true vanilla items from myth and folklore.

Collecting such a wide range of magical item tropes, and pairing each with an illustration, makes this supplement 'game-night ready'.
Posted by Aaron E. Steele at 9:46 PM

Absolutely adored this book. I believe I gave my copy away back in the day, but it is definitely my favorite treasure resource.

I had completely forgotten about this book. I am sure I had this back in the day (well, my older brother did, which meant it soon became mine by squatter's rights).

Is this the book that has the feather cloak?

scottsz said...
Absolutely adored this book. I believe I gave my copy away back in the day, but it is definitely my favorite treasure resource.

My favorite as well.

Bree Yark! said...
Is this the book that has the feather cloak?

I believe so, but i'll double check ... perhaps I will blog some other items from the catalogue.

The RoleAids series was great! Chock full of gaming goodness! I have a nearly complete set of the RoleAids line. While some of it's pretty cheesy (Ice Elves, anyone?), a lot of it makes for a fun read. There were even a few solo adventures to go through, as well.

And Vallejo? Meh. Give me Frazetta and Parkinson any day!

I just found a copy of both volumes. I love them. I also found a lot of other Role Aids stuff. Pretty checkered lot, I must say. Thanks for the heads up!

If you come across evil ruins or lich lords for a good price, snap them up, they are very serviceable adventures.