Um, I was promised Witches? 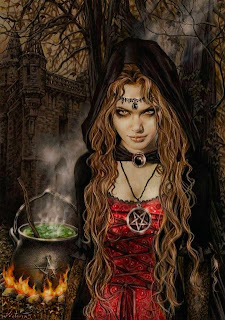 
The 1978 Holmes edition of Dungeons and Dragons had this to say about additional character classes.


"There are a number of other character classes which are detailed in ADVANCED DUNGEONS & DRAGONS. They are sub-classes of the four basic classes. They are: paladins and rangers (fighting men), illusionists and witches (magic-users), monks and druids (clerics), and assassins (thieves)." [page 7]


Now, i'm not some big-city lawyer ... (gasp!) ... but it seems to me that when we are promised a sub-class in an official D&D game-book, that TSR is obligated to deliver same . I propose, therefore, the immediate activation and use of the wayback machine, in which we will travel back to 1978 and demand, from EGG, the inclusion of Witches in the Advanced Dungeons and Dragons Players Handbook.


Perhaps the exclusion of a Witch class was not such a bad thing, what with the D&D hysteria that arose in the early 80's. The existence of a Witch class would certainly have added fodder to the claims that D&D was promoting devil-worship. And if you really wanted a Witch sub-class, there was an un-official version published in the pages of The Dragon, sometime in 1980 or 1981 (i'll have to check the exact issue later today). You could also have houseruled a sub-class, for use in your own campaign.


Still, there was something magical and powerful about having an "official" version of a sub-class. It gives the player some assurance that her character will not be disallowed at the table of the next DM. And it says that the archetype is sufficiently recognizable to permit its inclusion in the official rules.


I'm sure there is a story behind the Witches' exclusion from the Players Handbook. It may be as simple as "there wasn't enough room for another set of specialist spell-lists". Or it may be that Witches were considered as easily represented by the magic-user class, so we didn't need a sub-class for it. Alternatively, it may have been seen as too gender-specific, or even needlessly pandering to an almost non-existent female audience (role-playing and war-gaming being an overwhelmingly male past-time in the 70's).


One of the communication methods I have employed in my writing is to use both male and female pronouns when describing situations. I could use gender-neutral ones instead, but that seems even more complicated.


Going back and looking at the old D&D materials now, I wish there had been more talk of Gladiatrix's, Huntresses, Swordswomen, Sorceresses, Amazons, Witches, and Cutpurses, not as NPC's to be wooed, but as characters to be played.


Not because i'm into gender-bending, but because it would have sent the message that D&D was a game open to all, not just to those who were born with a Y chromosome.
Posted by Aaron E. Steele at 9:53 AM

Yeah, while I think D&D is the sort of the thing that was always going to appeal more to a male audience, the rather one-sidedness of its presentation certainly didn't help.

Hm, I'd like to see it included as well. To the way back machine!

Not to let the proverbial black cat out of the bag at all, but I have been working on a Holmes-ish Basic Witch. I want to have her out soon.

Even with the inclusion of more female classes in D &D I don’t know that the game would have attracted more female players. The few female players I knew back in the 80’s were usually the girl friends of some other player. Fast forward to now, there are more girls in our Dragonquest groups than ever played the game in the past. I suspect I would have more if I could handle a larger group. I think the real change in perception happened outside of the climate of D &D and other RPGs. Harry Potter, LOTRs and other movies& books that helped mainstream fantasy opened the doors to a wider player base.

@ Trey: Witch is a far more gender specific dlass name than any of the official classes in 1e, which (ha ha) always struck me as gender neutral, by and large.

Do you think if scrap booking, for example, were presented differently, perhaps with more steel and leather, it would attract more men?

Dragon #114 had a Witch NPC class for AD&D. It also had some scandalous cover art featuring a witch.

The various versions of the class that have appeared over the years in places like The Dragon have, I feel, overcomplicated the subject. I would love to see a simple Holmes-style Witch class and look forward to seeing what you come up with Tim.

Stuart said...
Dragon #114 had a Witch NPC class for AD&D. It also had some scandalous cover art featuring a witch.

Hmmm.. I was thinking there was one in Unearthed Arcana. Off to the books I go :)

Let me know what you find.

I don't recall it being there, but its been some years, and I no longer own a copy.

I remember vividly the first time I heard about D&D. It was the 6th grade on the playground at recess. A friend was telling me about this cool game you could play knights and fight dragons. The first thing I asked him was if there were witches. I'm not sure why. Probably because those were the epitome of the fantasy villain for me. I was always disappointed that his answer was "no."

I think it depends on what you mean by 'witches'.

'Witch' is, in my opinion, a better name for either class than the name they actually have.

I do recall someone working up evil witches as an anti-cleric, and it fit extremely well. Other than allowing armor, that is. To make up for that I would allow them daggers, obviously, and put a few appropriate m-u spells in their lists, such as Fly.

I think, for me, that would be the simplest and most elegant solution.

I remembered the witch in Dragon #43 as well so I figured I'd check out my CDs.

The witch in #114 is an expansion and re-write of the earlier one as clearly stated at the beginning of the article.