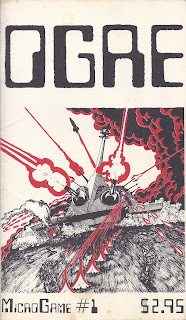 I can't help but feel a bit torn, here.
While i'm pleased by the news that Steve Jackson Games is re-releasing Ogre, the scope of the release and scale of the final package is more than a little bewildering, for someone who loves this game and wants to see others discover its' value as well.
Ogre is the first microgame I ever owned. At $2.95, it is a lot of game in a little package.
The premise is simple. On one side, an array of future-tech combat units: heavy tanks, ground effect vehicles, missile tanks, and nuke-firing infantry. 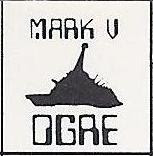 On the other, one huge tank, dubbed the Ogre.
The Ogre's mission: to destroy the defending army's command post.
Ogre had lots of replay value, as the defender can select different combinations of units, each time she plays, to see which combination of units and strategy is most effective at stopping the Ogre's advance.

I'm not surprised that SJG has decided to re-print this classic game. On eBay, used copies of Ogre command high auction and buy-it-now prices. Nor am I surprised by the price they are asking, for this reprinted game. The bits for SJG's new Ultimate Ogre look gorgeous. No doubt the game will be well-worth the money. 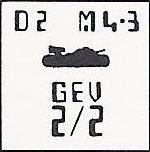 But the $100 pricetag, and limited quantities, means very few will have the opportunity to own and play Ultimate Ogre, and that's a shame, since this is one of those games that everyone aught to have the chance to play.
At $2.95 in 1978, Ogre was accessible to just about anyone. At $100 in 2011, who, but the high-end collector or Ogre fanatic, is likely to purchase Ultimate Ogre? 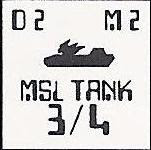 Microgames in general, and Ogre in particular, embody the essence of what good games are all about. Simple rules. Quick play. High replay value. 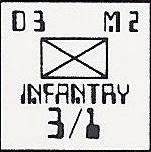 It's too bad so few modern games espouse those design goals. And too bad SJG isn't releasing a more affordable version of Ogre for those who would love to own this, but can't afford the $100 touch they are proposing.
Posted by Aaron E. Steele at 7:04 PM

It is a shame not to see Ogre coming out as a microgame, but I'm not surprised - the market simply does not exist any longer. Why would it? Today's "micro games" are Flash-driven Web games. SJ pretty much admits he expects to lose money even charging $100 a box for this.

So while I understand the price point and rationale, what saddens me is to see that this edition comes with "all the options" - Grognardia posted about the original Ogre a few weeks back and he talked about the game's elegant simplicity and how it got bogged down under all the later supplements, a view I definitely share. Simpler is often better.

Agreed. Perhaps a $1.99 Ogre app is in order, for those who don't intend to drop $100 on the tabletop version.

I know I'd buy it. Who knows, could be the Angry Birds! ;P

I would be surprised if SJ Games doesn't put out a re-release of the 1990s VHS-box sized game if the new deluxe version goes well.

But maybe you're right and the modern equivalent is an app. OGRE/GEV would make an excellent app game...

I don't see why they couldn't make an affordable version. I got Dungeon Alphabet in hard cover for $9.99. They couldn't do a decent board game for $20?

Course I still have my OGRE and GEV (first game I ever bought with my own money) and multiples of Shockwave and the other supplement, tucked away with my copies of Melee, Wizard, Death Test I&II and the ITL stuff. So I'm good. I guess.

(You should run an OGRE session at the Underground Con...)

K-Slacker said...
(You should run an OGRE session at the Underground Con...)

"Hernia-box" board games seems to be the way of things these days. If you ever try picking up an Arkham Horror box with its expansions, remember to lift with your knees.

Personally, I'd be much more interested in a re-release of classic Ogre instead of the super-deluxe version that is priced right out of my range.

I deeply regret no longer having any of my old microgames. I doubt we'll see their like again.

I can't pretend to know the economics of the thing, but there must be soem way to make a simple version of OGRE available at a simple price. As you say, the deluxe thing is nice for collectors and geeks with too much money, but having kids myself, I find myself wabnting to buy the simple, no frills, micro-version. Hmn.