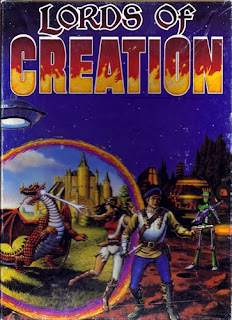 While Dungeons and Dragons was never explicitly about becoming a God, Lords Of Creation ("LOC") is.

Written by Tom Moldvay, and published in 1983 by Avalon Hill, LOC is characterized as "a role-playing game of science fantasy, fantasy, science fiction and high adventure that explores the farthest reaches of the imagination."

Like Dungeons and Dragons, LOC characters progress through a series of levels. However, achieving higher levels in LOC allows the character to unlock God-like abilities, ultimately culminating in the ability to create pocket universes.

Dungeons and Dragons was never so transparent, was it? I imagine the Immortals ruleset and high-level modules may have pitted the Characters against the Gods, or even provided rules on how one became a God in Dungeons and Dragons, but few serious players ever achieved those heights.

For those players with evil wizard and cleric characters, there was an alternate path to immortality: lichdom. Arguably the easier road, though harder on the eyes -- in more ways than one.

In the day, I heard reports, around the game-store cash register, of characters in this or that D&D group making the transition to Lich, with the campaigns continuing on after that metamorphosis.

The idea of characters as monsters -- not in the humorous vein of Monsters! Monsters! or Reverse Dungeon, but as bona fide malevolent beings spreading murder, mayhem and misery -- is foreign to me. Not that characters as Gods is any more palatable: I expect being able to do anything you liked, within the game, would get old, and fast.

I simply prefer playing in games where the characters are flawed heroes, lusting for treasure but often doing the right thing (like Conan in the Howard tale, Jewels of Gwahlur) rather than the bloodthirsty D&D players acting out the murder of an entire village because they are 9th level and completely outgun the townsfolk.

Goodness knows we already have enough real evil in the world.

One would also presumably have to deal with existing gods being actively opposed to new gods just popping up willy-nilly.

That said, Lords of Creation is a game I've always wanted to take a peek at again.

If I wanted to play something close to an all-powerful being, I always preferred just starting out as a "god" right from the get-go, so I played a lot of Amber Diceless RPG! ;-)

Anyone else ever into Amber?

I would have thought you'd just scale it up once they become gods?

The greek gods weren't perfect by any means, nor were those of the vikings. And nether of those lacked for worthy foes either, giants, titans, other gods, and without all the crushing implausiblity that comes with tradtional D&D economics (gods deal in souls after all)

Most players desiring to become a major force for evil have no real conception of what 'evil' might actually be or what it would entail to actually 'be' evil. They also seem to assume that they are going to be able to wreck things, lash out with impunity, and scatter destruction and mayhem at will with no regard to the consequences. Crap. Utter crap.

Being or acting in an evil manner is self-defeating. It isn't about just being an amoral jerk--a palidon or a cleric can do that just fine without resorting to being evil. It isn't about undermining everyone else in order to then have things your way--once you become an avatar of destruction you do not build anything.

Besides, anyone acting in an evil manner attracts the attentions of all those palidons, clerics, vampire hunters, and other do-gooders who are hell-bent to foil tehir schemes, ruin their plans, meddle in their affairs and expunge them from the world. It's a lot tougher road to travel--you cannot seek shelter nor succor from most of the 'normal' sources. You cannot benefit from a lot of the 'usual' means for recovery or healing. Open society is arranged against you. And those you consort with are as untrustworthy as yourself, or even moreso as they are out to prove that they are even more evil than you...

It's usually a very short career. At least in any sort of a setting where there are actual repercussions to player actions, consequences to their choices, and some measure of push-back from the world so that the so-called evil ones aren't operating in a world that lets them get away with everything scot-free. Every village they burn could produce another vengeance-driven would-be Conan to hunt them down. Every Noble they cross could lead to a vendetta, assassins in the night, poison in their tea, or worse. And best of all, no matter how evil they think they are, there's someone far more evil just waiting to take their souls, destroy them for the prestige, or to enslave them as part of its bigger plans.

Playing an evil character, becoming a lich, or attempting to achieve godhood does not happen in a vacuum. Your character is very likely not the fist one to ever tred down this path. There are those who went before, some of whom are waiting for you, like tigers waiting to pounce...

There is a silver lining to this. Play out the "evil" spoiled child routine then shunt him or her off to their own private dimension. Finish said campaign. Then revisit campaign with the pcs including the player who was playing said spoiled child to stop the great evil that has been unleashed upon the universe. West End Star Wars had a nice solution for this. Get so many darkside points & hand the GM your character sheet. Your pc becomes an NPC.

That story you linked to is scary. The hatred and evil from both the perpetrator and the victim's family was palpable.

I actually had a character who was bound to a lich through a curse, and at times would go through a metamorphosis not unlike The Incredible Hulk, where at times he would become a lich. He was a tortured soul. Come to think of it, that sounds a heckuva lot like Ghost Rider, too. Once my characters were high level I had DMs who loved to rain hell upon them, which gave them interesting roleplaying opportunities.

I've always preferred playing a good guy, even if it was a reluctant hero like Mad Max or Decker in Blade Runner. My best friend and I found ourselves in an unenviable position in our High School gaming club -- we were the only good characters in a primarily evil party of PCs. Within the first our of play night was approaching and the other characters were planning to kill us as we slept. Another DM, Marty, took pity on us and talked to our current DM, and convinced him to let us "leave town" and we springboarded Marty's campaign where good was the norm, not the exception.

I've never been a big fan of playing deities in my games, and also tend toward favouring flawed heroes. To that end, I've always been wary of playing games in the epic tier, as they tend to approach godhood, if not encroach on it. 4E is fairly explicit about this in their epic destinies, which almost all end in some form of immortality or deification.

I'm even hesitant to roleplay a deity as a DM. By definition any god that comes into play will outshine the PCs, so I try to keep them out of direct involvement.

At one stage in high school I allowed the players to basically play anything they wanted and it resulted in campaign of over the tops powerful characters. It did make the game fun, and all criticisms of Monty Haulism aside, made for some very enjoyable scenarios to play out. I just scaled up the opposition to match the characters and didn’t think too much of it.
I tended to make the deities and demons in my campaign flawed and potentially beatable. Not likely, but possible. I think the Trojan War was my inspiration. Playing out our own version of the Trojan was actually a lot of fun. It all started by the question of which goddess was the most important: 1) Hera 2) Athena 3) Aphrodite 4) Demeter. I think there may have been others to choose as well, but the player chose Demeter and was never forgiven by the rest of the group. GOTTA EAT!

On a note not directly related to this post, I'd like to pass on the Stylish Blogger Award to you (I explain why at: http://clashofspearonshield.blogspot.com/2011/04/stylin.html). It is one of those awards with "rules" attached:

1. Share seven things about yourself in a blog post
2. Select at least one other blog you think deserves this award, and offer it to that blog
3. Contact the blogger(s) you've selected and let them know about the award

Of course, I'm sending this to you since I think your blog is cool and deserves it, so you are welcome to simply accept the award (just download the image from my page) and show it proudly on your blog even without following the three "rules" above – they're really there just for fun!