The Endless Stair And Player Choice 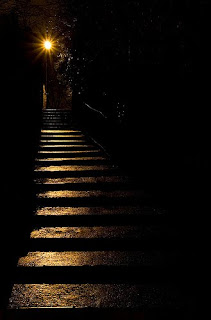 Keep On The Borderlands is one of the better TSR modules. Not because it has well-developed NPCs (it doesn't). Nor because of its' exceptional artwork (serviceable, but not mind-blowing). Not even because of it has a sophisticated plot (at best, the DM may tease something out about the Temple of Chaos organizing the scattered humanoids into a raiding force).

What is great about Keep On The Borderlands is that it allows players to select the level of challenge they are willing to face.

Among the rumors provided in Keep On The Borderlands is that the deeper you go within the Caves of Chaos box canyon, the more dangerous the denizens. A cave mouth closer to the canyon entrance is less dangerous, while those at the end of the box canyon are likely filled with fearsome opponents, and fabulous treasures. The players can play-it-safe, and explore the nearer cave-mouths, or take a chance at the deeper ones. The DM can adjudicate the results of that player choice, free of any hint of bias, since it is the players themselves that pick the easier or harder road.

It is well-understood by all experienced D&D players, that the deeper within a dungeon you delve, the more dangerous the traps and monsters. Yet one of the design principles, regularly applied to dungeon creation, is that the stairs to the next-deeper level are difficult to discover. Call that what you like: I call it railroading.

Rather than hiding stairs to the deeper levels, i'm of a mind to have one staircase -- The Endless Stair -- that traverses the entire depth of the dungeon. Not a staircase that goes directly down mind you, but one that meanders, splits, crosses chasms, follows underground rivers, backtracks on itself, and reveals varying architectural styles at different points in its' descent.

As the stairs decend, there are dungeon levels hiving off in different directions, sometimes blocked by hastily-completed walls, or locked and barred doors, offering danger, mystery and treasure. There may be collapsed stair sections along the way, requiring magical or mechanic means of bypass, and portcullises on the staircase preventing immediate entry to lower levels for those lacking creativity, but there will be no question where those stairs are.

The only question ... for the players ... is whether they are feeling lucky today, and want to take a chance exploring lower dungeon levels in exchange for potentially higher rewards.

Not because it has well-developed NPCs (it doesn't).

Not having well-developed NPCs is a virtue, at least for creative players.

The Endless Staircase is a good approach to dungeon design because it reflects real construction techniques. I remember the (SPOILER FOR A THIRTY YEAR OLD GAME) elevators in the first "Wizardry" game which tempted unwary players into a variety of TPKs.

"Hey, let's pop down to the 9th dungeon level for just one encounter."

I thought this was going to be a comparison between B2 and the Companion level module, "The Endless Stair" which while not a railroad, contains too overly developed NPCs and very little way for PCs to discover all the stuff going on between them without a 'villain monologue' type scene being forced upon the players.

Anyway, I like the idea. In the megadungeon I'm developing, I've got several big stairways down through the first four levels or so, very easy to find. From there, part of the challenge becomes locating paths farther down, but I don't hide them. And I may add a second "Grand Staircase" that connects several of the lower levels in a similar way.

If you do the single staircase approach, you might consider addin the Stair Stalker too. Maybe witches have special spells that allow them to drive off or charm Stair Stalkers...

Stonehell is a good example of this idea of multiple entries into different levels, or different parts of levels, some which are secret and some that aren't. I'm a player and not a DM so I don't have any idea of the full extent of the interconnections, but they take the form of elevator rooms, wells, staircases, underground rivers and a bunch of other stuff (ouroboroses ...ourobori?). It's definitely fun from the player choice perspective, but I'll note that it's often not clear if you're going down one level or more, so there's another level of risk evaluation involved. It's not only like Mr. Skald commented that you say "Let's go down to Level 9 and see what we find", it's more like "Are we going to Level 5? If we get in over our heads how are we going to get out?"

One of the cool upshots of that uncertainty is that as players we get kind anxious and jittery when we're exploring one of these things, and folks start checking their hit points and how much loot we've got and then there's some real reckoning about whether to take the money and run or just see if we can push our luck a little further. In the end, these "endless stairs" remind the players that the dungeon is way bigger than they are, both physically and conceptually. And it does it in a way that doesn't beat players over the head with an ominous back story or the DM supplying a bunch of foreboding imagery. Through exploration the players gain an appreciation for the immensity.

So I say hell yes, endless stairs! I'd love to play your dungeon when you get it together.

Scallop Skulled Skald said...
Not having well-developed NPCs is a virtue, at least for creative players.
And creative DMs!

The Endless Staircase is a good approach to dungeon design because it reflects real construction techniques.
Anything which creates conflict for the players (other than intra-party conflict) is a plus. It's the temptation to explore one more room, or delve another 50 feet deeper.

Lord Gwydion said...
I thought this was going to be a comparison between B2 and the Companion level module, "The Endless Stair"
I'm not familiar with the Endless Stair adventure, but from your description, it sounds pretty forgettable.

NetherWerks said...
If you do the single staircase approach, you might consider addin the Stair Stalker too.

Spawn of Endra said...
In the end, these "endless stairs" remind the players that the dungeon is way bigger than they are, both physically and conceptually. And it does it in a way that doesn't beat players over the head with an ominous back story or the DM supplying a bunch of foreboding imagery. Through exploration the players gain an appreciation for the immensity. So I say hell yes, endless stairs!

Really great observations, thanks for sharing them!

In my initial megadungeon thoughts that was exactly what I was going to do, but it was a spiral staircase going around a massive shaft. I got away from it because it ended up feeling too constrictive oddly enough. I may have to revisit it though.

My post today was on a similar wavelength, except I wrote about elevators.

I think you need some variation in the environments through which the stair traverse, in order to make it interesting.

Cool idea. If I were to run a 'mega-dungeon' I'd be tempted to use it. (However, I generally don't find such adventures that enjoyable, despite being very 'old school'.)

ha, I will experiment my thought, your post bring me some good ideas, it’s truly amazing, thanks.

While I realize this is years late -- it occurs to me your endless stair idea would work very well with that monastery on the top of the mountain in France -- the Monastery at the top provides a very basic beginning encounter (chock full of atmosphere and mystery, but probably not a lot of serious threats) and then the endless stair runs through the rock spire and deep into the underearth with some small levels in the rock spire and increasingly savage and massive levels down below. Could make for quite an interesting mega-dungeon....