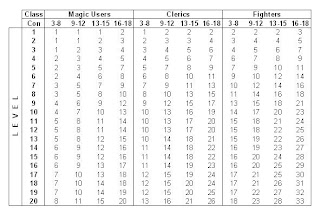 I created this table several months ago, for some reason. Perhaps I was suffering from a particularly nasty flu at the time. Delirium can precipitate odd behaviours, such as creating the above table.
This table was supposed to convert hit points to wounds. The idea was that instead of rolling for hit points, and marking damage from attacks against those hit points, each player would have a certain number of wound points. One wound point would equal one successful attack.
Therefore, there would be no rolling for how many hit points of damage a character could take: instead, if a monster successfully attacked a character, she will take one wound. The number of wounds a character could take is dependent on the character's constitution and level. For example, a 1st level Magic-User with a 3 constitution will start with 1 wound. A 1st Level Fighter with an 18 constitution will start with 3 wounds. As the characters go up in level, their maximum wounds will increase.
I'm sure there is a good use for this table. Off-hand, i'm not quite sure what that is.
Perhaps I was reading Chainmail at the time. In Chainmail, Heroes can take no more than 3 wounds simultaneously without dying, while Superheroes can take no more than 7. I may have been "inspired" by that reference to Heroes and Superheroes, in creating this fever-induced table.
Do you think the beginnings of another fantasy heart-breaker are in there somewhere?
Posted by Aaron E. Steele at 9:14 PM

There is something too this system. There is less chance that a magic user is going down in one hit and does reduce the number of rolls speeding up combat.

Would the same system apply to monsters? In 4E as I'm sure you are aware, minion creatures only take one hit to die.

It certainly is interesting, and I'd like to see what you, or someone else, will make of it.

It'd be nicer if it were HD/HP conversant so that listed Monsters or Characters could be converted at a moment's glance.

It's just a system where everyone has much less hit points, but monsters only do 1 hit point of damage.

The next step is to say, "well, maybe a dragon's fireball breath should do 3 wounds, and an ogre's club 2 wounds, and..."

Then next you say, "but that means some monsters will be certain death for PCs, maybe they should roll for how many wounds they do..."

... and pretty soon you're back where you started :)