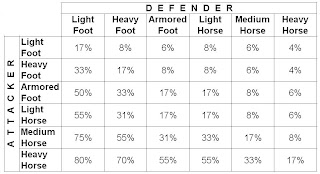 Several months ago, I expressed my dissatisfaction with the Dungeons and Dragons Cavalry rules. At the time of my first post, I noted that recent iterations of D&D have little, if anything, in the way of true Cavalry combat rules, to the point where there is little advantage to employing mounts, other than as beasts of burden.
I recently took advantage of "Read An RPG In Public" week, to read my copy of "Chainmail: rules for medieval miniatures" on the train, as I travelled between work and home. As most of you are aware, Chainmail was the default combat system for original Dungeons and Dragons (although an optional "d20" combat system was also provided in the OD&D rulebooks, for those without access to Chainmail).
In reviewing the combat tables in Chainmail, I was reminded of just how much more effective Cavalry was considered to be, in that set of wargaming rules. The Chainmail combat tables themselves are based on different numbers of six-sided dice and required target numbers for a successful attack. I have converted those dice probabilities into percentages, and displayed them in the above table. I am fairly confident in my math, but if any of my calculations are wrong, i'm sure someone will point those out to me.
As you can see, in the Chainmail rules, Cavalry is very dangerous. Take a matchup between a Heavy Horse (your typical Mounted Knight) and an Armored Footman (a well-armored Fighter). Based on the Chainmail rules, the Fighter has a 6% chance of killing the Knight. On the other hand, the Knight has a 55% chance of killing the Fighter.
Pity the Light Foot (your typical peasant militia) being pitted against a group of Armored Knights: the militia is given a 4% probability of killing the Knight, while the Knight mows through the militia 80% of the time.
Using the Chainmail combat tables for wilderness encounters would certainly change a player's view on the attractiveness of obtaining mounts.
Posted by Aaron E. Steele at 1:56 AM

Hmmmmmmm. I'm wondering if I'm seeing the key to a solution for the "man vs. Cape buffalo" scenario I blogged about recently.

Gotta get me a copy of chainmail.