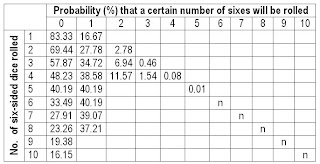 Some of you will already be familiar with my obsessive nature. Assuming you have forgotten same, I will refer you to my recent spate of Harpies posts.

Thinking about that Chainmail mass-combat system led me to the above table. I was trying to determine the probability of a certain number of sixes being rolled, based on the number of six-sided dice you were permitted. I'm not sure why it matters, i'm just obsessive that way.

Sadly, I do not remember my permutations, combinations and probabilities module from senior high-school (it being several *cough* years since I graduated) so much of the above table was created manually. Horrors!

My skills (and confidence in my calculations) started to fail me, as you can see by the incompleteness of the table. I'm hoping one of my more mathematically-inclined readers will remind me of the formula to calculate these probabilities, or, even more generously, fill in the blanks...

Incidentally, I was interested to see that the probability of rolling one six diminishes, once you roll more than six dice. That makes sense, since there will be an increasing probability that you will now roll two or more sixes.
Posted by Aaron E. Steele at 10:05 PM

Sorry, no remember math neither. Instead I have puter brute force. 10min and 1,000,000 rolls per row later we get some sadly not very accurate data. Who cares about tenths of a percentage anyway?

Oh why is the pre tag not allowed, curse you formating heathans!

You are a scholar and a gentleman!

My most sincere thanks, my wife will be pleased that I will stop mumbling "factorials, factorials!" in my sleep.

Incidentally, looking at my notes, your calcs should be very accurate up to 7 dice. Would you believe their are 1,679,616 combinations with 8 dice, over 10 million with 9 dice, at over 60 million with 10 dice? Try figuring those probabilities manually!

The probability for k successes rolling n dice is