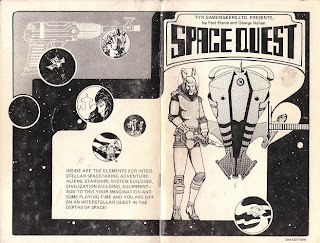 In an earlier post, Robert Saint John was asking me about sci-fi games that I may have played in the past. There was one very peculiar, strange little science fiction game, that came to mind. It was a "space-opera with monsters in space" sort of game. That game reminded me of some of the more outlandish "monster-filled" Star Trek episodes.
In the moment, while responding to RSJ's comment, the name of the game escaped me, but, since I was in the basement the other day rummaging through my old gaming collection, I thought I had spotted it. Indeed, I had. And when I went and pulled it out of storage, the irony of RSJ's question struck me, as it occurred to me that he had referenced the game, in a blog he wrote some nine months ago.
The game is called Space Quest, and was published around 1977, so it seems to pre-date Traveller. I have the 2nd edition copy, which was published in 1979. Space Quest rpg was published by Tyr Gamemakers Ltd., with authorship credited to Paul Hume and George Nyhen, who hailed from Arlington, Virginia. I say it was a peculiar, strange little game, because (to my knowledge) it never amounted to more than a single 110 page booklet, and it had monsters in space. It was a glorious, inspired, terrible, corny, delicious little game, and was too eclectic for its own good. Paul Hume is credited with producing several other game titles, including Aftermath!, Bushido and Shadowrun. I was a fan of Aftermath! (though I preferred The Morrow Project), but I never played Bushido or Shadowrun.
From the introduction:
"This is a large and confusing game. Hopefully, the confusion will lessen as the rules become familiar, but the size will still be huge! We have here a game operating on scales ranging from two men shooting it out, or even dueling with swords, to the clash of whole fleets or armies. We have developed a scale for interstellar transport, and one dealing with the taboos of a single planet's culture. We have tried, in 110 pages, to create a set of rules allowing campaigning on any level desired for science fiction-fantasy wargaming.
Naturally we have failed in many areas. We have no rules for detailed on-planet adventures, and nothing to deal with the personal scale of 'where in this building am I?' There are holes galore (black and otherwise) in the structure of this book. Much of this is purposeful, for to give a fuller picture would have required us to make the background of our own campaign the basis of the game.
And we won't do that. This game is designed for the growing number of gamers who get off on the creative challenge of building their own campaign, with no premises beyond the mechanics of play, for players to get fat and lazy with."
Based on those comments, it is easy to see that this early science fiction game falls, whole-cloth, into the old-school gaming philosophy camp. Other than the barest-bones of the game mechanics, the game designers assume that each GM will make the game unique, tinkering and modifying to make the campaign her own (and that of her players).
One of the innovations of Space Quest was the use of a 30-sided die. You should understand, there was no 30-sided die available when this game was published (nor was there a 10-sided die), so the idea of using a 30-sided die was very unusual.
The Space Quest role playing game also employed a very well-developed (for its time) skills-based character system.
While this science fiction game certainly had its charms, it also had its share of corny elements. For example, it had 8 pages of deep-space travelling monsters, including a "void-shark" that could fire lasers from its eyes, and space dinosaurs.
Posted by Aaron E. Steele at 10:52 AM

I fail to see your point about the shark or dinosaurs.

I still have this game and played it in high school c. 1982. Our group liked it more than Traveller, which we also played.

with that cover looks like a D&D book, but this totally differet like generic viagra, I gonna take some time to read this better and learn more about this RPG.

Do you know where an original or a .pdf of this can be found?

I'd be really surprised if this can be found anywhere; it was pretty obscure even in the 70's.

It wasn't actually a bad little game for the time, though.

Another OSG that was great to play. Yes before traveller I played this back in Virgina in 1978.