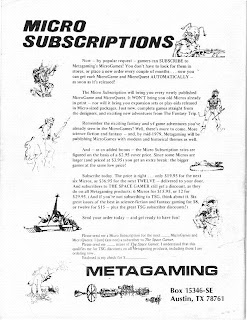 I presumed everyone knew about the Metagaming Ads in Dragon Magazine. Seems I was a mite presumptuous.

Here is an example of a Metagaming ad that appeared in the Dragon Magazine. The first thing you will notice is that it isn't a very good ad, from a design perspective. Not that any of the ads that appeared in Dragon were much better.
This particular ad appeared on the back page of the December 1979 Dragon magazine (#32). That was the same issue of Dragon magazine that featured "The Fell Pass", a fan-written adventure, winning the first annual(?) International Dungeon Design Contest.
This particular advertisement is promoting Metagaming's micro-game subscription service. You could become a micro-game subscriber, and have each new micro-game delivered to your door, as it was released. No more running down to the FLGS to see if the latest micro-game was available.
The images around the outside edge of the advertisement are pieces of artwork from several of the micro-games that had already been released, including Ogre, Chitin I, WarpWar, Wizard, GEV, Olympica, and Death Test.
Posted by Aaron E. Steele at 7:34 PM

Metagaming underestimated how much I **liked** running down to the hobby store to see which new games had arrived!

Sadly, it was kind of a mixed bag of releases from about that point on, wasn't it? Ice War was good and Invasion of the Air Eaters was clever, but I don't think I was able to bring myself to play games like Black Hole, Hot Spot or Dimension Demons more than once. The Helltank games were just spiteful, Starleader Assault was a huge disappointment, and Trailblazer was (IMO) unplayable. The Microquests went downhill after the wonder Treasure of the Silver Dragon.

The one bright light toward the end was The Lords of Underearth. Love that game, still play it occasionally. I shouldn't bitch. Ogre/GEV, Melee, Wizard and WarpWar still stand the test of time, and we just played Chitin:I 2 weeks ago. That's staying power!

Yes, the early games were among the best. I knew very few people who were willing to subscribe and take it on faith that Metagaming would continue to crank out winner after winner.

All of us nay-sayers were proved right.

Although my microgame collection is relatively complete, and I don't regret buying any of them (even the stinkers) very few of those later microgames truly had replay value.