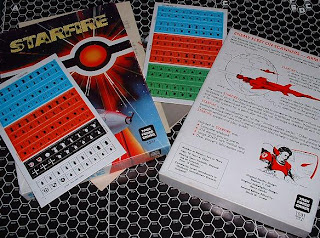 I have been a microgame player nearly as long as I have been a role-player.
The microgame concept and design philosophy was quite simple. Design and publish a fun, inexpensive game, that can be played in a few hours, that can fit in your pocket. Microgames were popularized by Metagaming, and anyone who remembers, or has seen, Dragon Magazines from the late 70's or early 80's will remember the Metagaming ads that appeared on its pages. Metagaming was very successful at producing interesting, fun little games.
But Metagaming's "apparent" microgame success spurred other game companies to dive into the market. TSR produced at least eight minigames. Task Force Games also joined the market, producing many excellent pocket games. SPI created its own line of capsule games. Steve Jackson left Metagaming and created his own company, and produced several excellent microgames. OSG, Mayfair Games and Heritage Games also joined the fray. The Classic Microgames Museum is a great place to check out the microgames that were produced by those disparate companies.
During those few short years, some excellent microgames were produced. Eventually the microgame market collapsed, but during that time, some classic games were created.
One of those classics was Starfire.
Starfire was first published by Task Force Games in Amarillo, Texas, in 1979 (interestingly, Metagaming was also sitused in Texas). It was the second microgame to be published by TFG, after Valkenburg Castle (another chit-based dungeon crawl, similar to SPI's Death Maze). The picture above is the "boxed" Starfire set, which was published in 1984.
Starfire is arguably the simplest, most elegant starship combat game system ever devised. I have to think that Starfire emerged from a computer programmer's mind. Back in the early days of programming, computer memory conservation was critical, because computer memory was so valuable. Starfire was designed the way a computer programmer might think: every "starship feature" was replaced by a single alphanumeric code, and each starship was represented by a alphanumeric string, called a "control record".
For example, here was a control record for the Destroyer McClellan:
McClellan - DD2 - (2) SSSAAAIHFIWDIII (6)
With (S)hields, (A)rmor, (I)on Drives, a (H)old, and three weapon systems, a (F)orce Beam, (D)efence system, and (W)eapon [missile].
The (2) at the front of the control record represented how many hexes the ship had to move before it could turn, and the (6) at the end was the maximum velocity of the ship.
Ships took damage, from left to right, which is why the shields and armor appeared first in the control record.
The game was designed as a dog-fight in space: you wanted to avoid having an opponent get behind you, as you took more damage if you were attacked from behind.
Sadly, this game suffered from the same malady that inflicted other great gaming systems. It's popularity encouraged rules and supplement bloat. The game, and it's assumed universe became so popular that it was novelized, and eventually turned into a computer game. If you can find a copy of the original game, or someone that owns a copy and wants to take it for a whirl, you will not be disappointed with the game-play.
Posted by Aaron E. Steele at 3:36 PM

The ship stats remind of of the hexidecimal notation used in classic Traveller to track a characters attributes.

Or the Universal Planetary Profile.

Did they do the same thing for a ship profile in Traveller?

Your microgame posts are great. I used to have several myself and we played them during lulls in our all night D&D sessions back in high school (not that sleep or a nice bowl of fruit would have hurt us). I couldn't remember the names of the games we had, but I recognized some from the picture in a previous post.

Happy to oblige! I will probably feature other old micro-games, as the opportunities present theselves.

We played ridiculous amounts of the "I.C.B.M." minigame back then. Reagan was really freaking us out, 'Evil Empire' talk and all that.

ICBM is one of those games that certainly dates itself.

I wonder if it had any influence on the development of game Supremacy?

I loved Starfire and Starfire II. As the years went by and other games were lost or destroyed in various ways I always made sure my original little baggies were safe. They're downstairs right now. Maybe I had better go check on them.