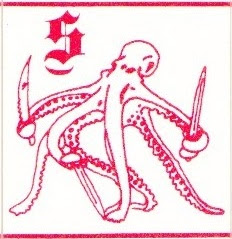 Every 1970's game design house was strongly affected by the success of TSR's Dungeons and Dragons game.

If you look at the history of such established chit-and-hex firms as SPI and Avalon Hill, you see mad scrambles to catch up to the phenomenal growth curve of TSR, and capture some of the role-playing game market.

Then there were upstarts, like Metagaming, that came onto the scene just as TSR was finding its legs. But, despite being contemporaries, and settling (initially) into discrete niches, you still find them trying to horn in on the success of D&D.

Like SPI and Avalon Hill, Metagaming desperately wanted to penetrate the roleplaying game market. Their unique business model was microgames; small format chit-and-hex games that could be carried anywhere, and played anytime.

But after Metagaming's success with the Steve Jackson-designed Melee microgame, and subsequent further success of the spellcaster-based follow-up, Wizard, Metagaming poured significant energy into expanding those two games, creating what they hoped would be a full-fledged RPG competitor to D&D. That expansion led to the creation of "The Fantasy Trip", being Advanced Melee, Advanced Wizard and In The Labyrinth.

With the departure of Steve Jackson from Metagaming, TFT would subsequently become GURPS.

One of the Metagaming Melee and Wizard supporting lines was a series of Microquest boxed supplements. These were small format boxed adventures, that provided everything you needed to run a pre-programmed game, in either solo or game-mastered mode. Those microquests were not terribly sophisticated, as they were typical hack-and-slash fare. 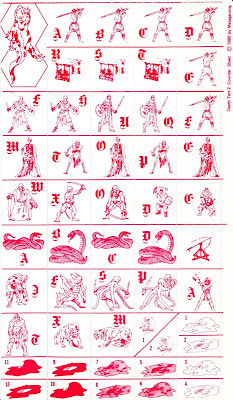 But they included the most wonderful cardboard counters!

The above counters are from Death Test 2, a maze and set of arenas below Thorz' palace, intended to test the character's mettle, in anticipation of eventual employment in Thorz' mercenary army. As I observed earlier, the combination of skeletons, weapon-wielding octopuses, and other assorted denizens, was welcome inspiration for our middle-school imaginations.
Posted by Aaron E. Steele at 1:00 AM

I was a huge fan of Wizard and Melee back when I was in high school, and I spent many hours pitting my characters against Death Test and Death Test 2. I never got tired of solo adventures like these.

I also ran a TFT campaign that remains one of my most memorable campaigns ever.

Loved the Octopi, a truly original TFT monster. Reminds me that I really want to try to sculpt some minis of those!

Weapon-wielding octopi were the best part of Death Test. Those games were a blast. you had a character made and in the arena within a couple of minutes. The counters were wonderful--super portable and they made it easy to get new players to really grok what was going on. Fun stuff. Thanks for the blast from the past.