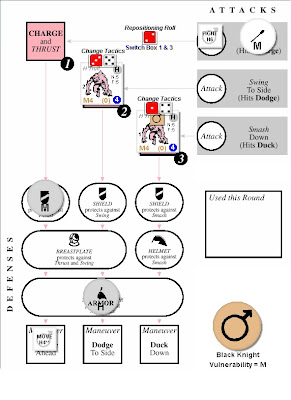 I promised a Magic Realm combat example.  Here is the first round of a combat between the Black Knight and a pair of Heavy Trolls.

As you can see, the Black Knight's H6 Fight chit, along with his Medium Mace, have been positioned in the top-most "Thrust Ahead (Hits Charge)" Attack box.  The H6 Fight chit was played, as the Mace is a medium weapon, and needs to be "overswung" with a heavy Fight chit in order to do heavy damage, and thus kill the Troll.  The Black Knight's attack speed of 6 is a slow attack: the Black Knight was counting on the Heavy Troll not changing his attack direction.

The Black Knight was attempting to strike Heavy Troll 1, who was originally positioned in the top-most pink "Charge and Thrust" opponents box, but that Troll switched to bottom-most "Duck and Smash" opponents box during the first round's combat resolution phase.  As you can see, the "repositioning roll" was a 2, resulting in a switching of the monsters in boxes one and three.

During the set-up for the first round of combat, Troll 1 was placed in the top-most pink Charge and Thrust opponents box.  Therefore, the Black Knight's shield was also placed in the left-most shield oval, to protect against that anticipated attack.  The Black Knight's Suit of Armor, of course, protects him from attacks in all directions.

The "double effort stars" (**) on the H4 Move chit tells us that this maneuver is very fatiguing.  As a result, the Black Knight will suffer fatigue at the end of the first round of combat, and will have to set aside one of his chits.  He will need to rest during a subsequent game day to recover from the effort expended during this first round of combat.

Because Troll 1 switched from box one to three during combat resolution, the Black Knight failed to hit and kill the Troll.  However, the two Heavy Trolls also missed the Black Knight, since neither "lined up" with the Black Knight's Charge maneuver.  And their attack speeds of 4 were not fast enough to undercut the Black Knight's maneuver speed of 4.
Posted by Aaron E. Steele at 10:05 PM

And this is why I really have begun to enjoy playing Magic Realm. It's tactical positioning without miniatures, and chaotic outcomes that feel like they are based on decisions, not on random numbers.

Agreed. I've been playing some 5-player Magic Realm games recently. Talk about a combination of strategy and chaos!

I'm learning to play MR. And I'm searching for all the guides I can. So, possibly my question is so silly but I don't understand one thing. If you think that trolls will not change position, Why do you put your H4 in the left box??? If you want to avoid the attack, you have to put it in the right box. Allways thinking that they will not change positions. Did you put it there in case they are going to change?
Thanks.