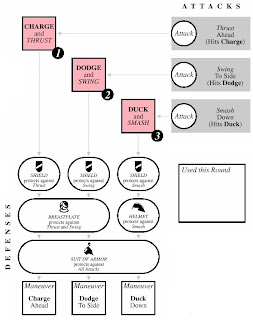 One of the areas in which Avalon Hill's Magic Realm differs, dramatically, from Dungeons and Dragons, is in the combat system.

A player chooses their method and speed of attack, their armor, and their maneuver.  They then cross-reference those three choices against the attack and maneuver of their opponent.

There is no "to-hit" roll.  There is no rolling for damage.  You either kill the native or monster, or you don't.

With certain exceptions, your chance of killing or being killed is within your control as a player, and depends on your choices, before and during combat.

There are five elements to the combat resolution system in Magic Realm.

The first element is your direction of attack.

You may recall that in ADnD 2nd Edition, each weapon is classified by type, either (B)ludgeoning, (P)iercing, and (S)lashing.

Likewise, in Magic Realm, players may select one of three attack directions during combat: Smashing, Thrusting and Swinging.

For example, if you played a medium axe as your weapon, you would need to play a medium fight chit or medium gloves card in order to use it.  Playing the above heavy (or a tremendous) fight chit with the axe would allow you to "overswing" it, resulting in the next higher level of damage being inflicted if your attack is successful. 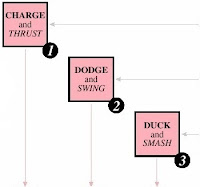 The next combat element is these pink boxes from which the monsters or natives move and attack.

In Magic Realm, the monsters and natives are not sophisticated enough to attack and move in different directions.  They either charge forward, while thrusting with their weapon, dodge to the side while swinging their weapon, or duck while smashing down with their weapon.

You place the monster or native you are fighting in one of those pink boxes.  If you a fighting more than one, you must place each in a separate box, and if you are fighting more than three you can place any additional monsters after 3 in whatever boxes you choose.  It doesn't really matter which box(es) they are placed in: during the combat, the monsters will change directions, so you have no control on which box they finally move and attack. The third element is your defences.  Many characters start with, or purchase armor.  Your active armor counters are placed in these boxes.  As you can see, the suit of armor protects you from attacks coming from any direction, while the helmet and breastplate protect you only from certain directions.

A shield protects in any of the three attack directions, but can only be placed in one of the three circles.  Therefore, a player must decide in which direction she wants to be protected by her shield.

The fourth element is your maneuver.  A player can play either a move chit or boots cards (either of which whose strength is at least as strong as the weight of the character and everything she is carrying) or the horse she is riding, in one of these three boxes.  I suppose she could also play the Magic Carpet, if active, or use her broomstick spell, if she is playing the Witch.

The final combat resolution element is the Used this Round box.  Players can play fight and move chits to perform certain extra activities, such as alerting a weapon, running away, or going berserk (in the case of the Berserker).  Those extra activities require that the chit used to perform the activity be put aside, in this box, and are thus not available, that round, for other activities.

We'll look at the how a combat round is resolved, in a subsequent post. 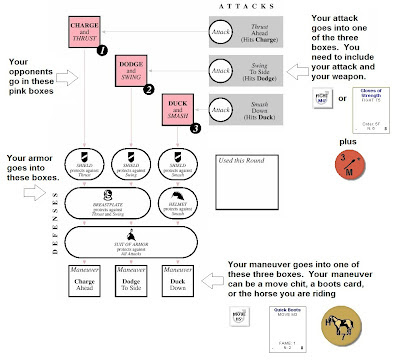 I'm glad you're enjoying it. I'm enjoying writing about Magic Realm, as it is a great little(!) game.