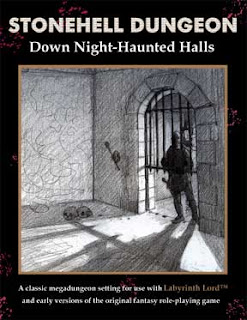 I've been avoiding writing this, and my review of Legends of Steel, for several days. Why? Because frankly, i'm not sure I can do those two old-school offerings justice. Several far-more-capable bloggers have already described and critiqued both Legends of Steel and Stonehell Dungeon. Nevertheless, as I had made a commitment to several OSR fellow-travellers to provide my thoughts on those books, I give you the following.

I was surprised to find myself in possession of both Stonehell Dungeon and Legends of Steel, several days after Christmas. Santa had already been very good to me, and I presumed that the rest of my Christmas wishlist would be doled out over the next several months, when the opportunities and cash-flows warranted. To my delight, I was handed a box, and discovered that the Lulu items appearing on my Christmas list had been ordered, but too late for Christmas delivery.
Inside the box were Labyrinth Lord, Legends of Steel, and Stonehell Dungeon.
Stonehell Dungeon is authored by Michael Curtis, of The Society of Torch, Pole and Rope fame. Truly, much of the propulsive energy behind the OSR is due to Michael Curtis and a handful of other Old-School Renaissance bloggers. They are actually publishing (commercially) the materials that others have only talked about for the last 10 years.
Not that many months ago, debate raged in our tiny corner of the blogosphere regarding the definition of, and feasibility of producing, a commercially-viable megadungeon. Several bloggers speculated that attempts to produce a commercial megadungeon were ill-advised, fraught with near-insurmountable obstacles and doomed to failure. While I cannot say that Michael Curtis has produced the penultimate megadungeon, his Stonehell Dungeon is a worthy entry to that category.
Stonehell Dungeon is 134 pages, and, while designed for use with Labyrinth Lord, is sufficiently rules-light to allow its use with other versions of the original fantasy role-playing game. Other than a touch of red ink on the front and back covers --used to evoke a blood-splattered look -- Stonehell Dungeon is printed entirely in black and white. The book is punctuated by the occasional black and white illustration, but most of the artwork consists of the dungeon levels themselves. As has been mentioned elsewhere, Michael Curtis employs the one-page dungeon concept, although he spreads each dungeon-section over two facing pages in the book, rather than containing the map (and related comments) on a single page. I appreciate the one-page dungeon approach, as it eases the burden of the gamemaster, by reducing the need to flip pages during play.
Michael Curtis provides some background on the construction and population of Stonehell in his introductory chapter. I understand the compulsion to justify the creation and continued existence of any dungeon, and the author does a remarkable job of creating a believable and intriguing backstory. Had I been advising Michael, I might have suggested putting the dungeon-background in an Appendix: being heavily influenced by systems-theory, I feel that putting the author's backstory at the end of the book would re-inforce the message that Stonehell Dungeon is the DM's, to put their own stamp on things as they wish, with the author's backstory being one of several possible histories.
The upper, ground level of Stonehell Dungeon is reminiscent of the Caves of Chaos from B2, Keep on the Borderlands, as that canyon and its caves might have looked in their earliest incarnations. Michael has remarked somewhere that he had added a few homages and references to early D&D in Stonehell: I enjoyed the reference to the Wolf-In-Sheep's-Clothing as the players pass the Gates Of Hell, and plan to have the related Bunny appear more than once in the games I gamemaster with this setting, and perhaps even in unexpected locations. 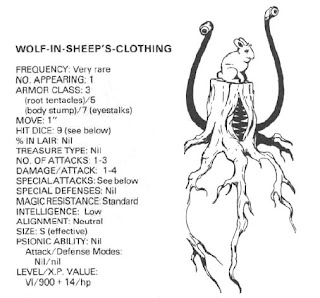 As mentioned earlier, Stonehell Dungeon employs the one-page dungeon concept. Since a megadungeon wouldn't be a megadungeon if it wasn't big, Michael had divided each of his five dungeon levels into four 30 by 30 quadrants, with connectioning hallways between them. Stonehell Dungeon has been criticised for the artificial nature of those divisions, and for the overlay of a theme to each of those quadrants. I suppose the criticism is a valid one, from a design perspective. But I wonder if players won't simply be oblivious to this artificiality, at least in the early going?
As for the dungeon itself, the amount of creativity poured into this setting is inspiring, and a more than a little bit humbling. At $13 for this book, I think I got back my money and then some, after reading to the end of the first dungeon level. While I have yet to feel that I paid too much for any of the old-school products I have recently purchased, having finished reading Stonehell Dungeon, I feel guilty for paying far too little.
I don't see how a gamemaster, or aspiring fantasy adventure or setting author, can go wrong with the purchase of Stonehell Dungeon. If you are in either of the above categories, you owe it to yourself to own a copy of this book.
Posted by Aaron E. Steele at 11:51 PM

Excellent review. In terms of the huge amount of usable gaming materials, it is hard to believe the price.

Thanks for taking the time to post a review, Paladin. I'm pleased you find the book to your liking.

Because of yours and Rusty Battle Axe's opinion regarding the pricing of the book, I intend to gouge the buyer when I put the sequel up for sale. Thanks for the suggestions! :-D

I can only imagine Stonehell Dungeon is a labour of love, and not a commercial venture, at the $13 asking price.

Having since printed and read the Mines of Khunmar megadungeon, which some hold up as a notable example of the genre, your setting compares very favorably to it.

Thanks for making Stonehell Dungeon available, it was a pleasure to read. I plan to use it, in pieces or whole-cloth, in a D&D game with some of my friends and neighbours.

I loved what you did, I think we can share more things about this issue, specially if generic viagra has been publishing articles with the same content. Most of the followers are happy about the critic content. I'll be a regular follower of your blog.