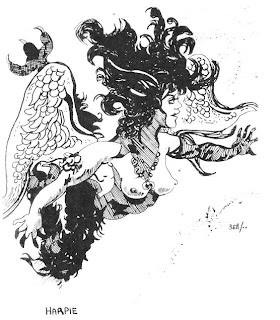 I'm not sure why we never used Harpies as opponents in any of our D&D games. We certainly never lacked for artwork to inspire us. The Harpy image (above) comes from the Original D&D Blackmoor Supplement II. She has her own distinct look in this artwork, quite apart from the later more hideous harpy images that populated the D&D rule and monster manuals, including the one from the Holmes basic set which I posted earlier. I think the image above is perhaps the one and only time that the D&D Harpy truly received favorable treatment. She seems to be swimming rather than flying though. Even today, with 4E (the latest version of D&D) the Harpy is relegated to ugly sister of the Siren. Perhaps that is justified, based on their greek mythological origins, although it is odd that they are substantially the same creatures.
Posted by Aaron E. Steele at 12:54 AM

That's a wonderful illustration. Proof enough for the naysayers of old-school art that everything looked cheap.

It's a shame when you consider how deadly and badass the harpy immortal is in Peter S. Beagle's book, The Last Unicorn. The harpy could definitely stand a makeover!

I never really used them because I always got that "Jason and the Argonauts" feeling from them. I love Greek mythology, but I like my D&D to be more standard "Tolkien-esque"

I remember playing in an AD&D campaign once where I had missed the previous session, but the one where I joined, we had to escape a Harpy Nest high up on a cliff towering over a wast unknown forrest.For some reason I can still visualize that scene, even thought that game was 15 years ago.

Check out the Clyde Caldwell harpy on the cover of "The Price of Power," a Greyhawk novel (kind of) by Rose Estes.