I've never been terribly satisfied with the concept of hit points. I know i'm not the only one in the old-school community, as others have blogged similar sentiments, along with their work-arounds.

One of my issues with hit points is this: which of the hit points represent the capacity to absorb wounds, and which of the hit points represent luck, fate, and good fortune? I ponder this issue, because the rules for the recovery of hit points vex me. While wounds should take time to heal, the same may not be true for luck and fate. Admittedly, hit points are an arbitrary and artificial representation of of how much risk you can endure and how battle-proficient you are. But if hit points, particularly at higher levels, are mostly luck and fate, why should it take several days, or weeks, to recover it? What purpose does the slow hit point recovery rule serve, other than to arbitrarily delay the adventure?

WOTC's 4E solution to the problem of hit point recovery is to implement their healing surges system. That allows players to recover hit points after (and sometimes during) combat, thus extending the game day, and shortening the periods between adventures. But WOTC's solution to the recovery of hit points is as arbitrary as their rules for meting out hit points in the first place.

Another of my issues with hit points is a selfish one. As a DM, I find it annoying to track hit points for multiple antagonists, particularly when those antagonists are mooks or rabble. For example, here is a wandering monster table from Module B1, In Search of the Unknown. 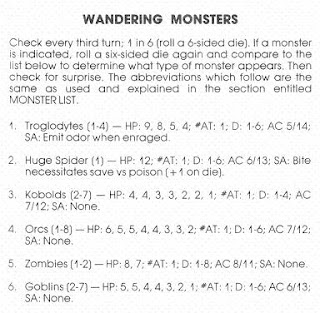 As you can see, the hit points for the eight Orcs range from a high of 6 to a low of 2. With the characters inflicting an average weapon damage of 4 on the Orcs, most of the Orcs will be killed with a single blow. But three will need at least two hits to dispatch. Tracking which Orc has how many hit points may not be terribly onerous when there are only 8. What if there are 28? Again, (and for "cinematic effect") WOTC has solved that problem by giving rabble one hit point. You hit the rabble, and it dies. Again, their solution works, but is completely arbitrary, since Troll rabble and Orc rabble both have one hit point.

My preferred solution to those problems: implement a system of wound and luck points, and rationalize and condense hit points to a level where a a hit point equals one successful hit.

With regards wounds and luck, each player would possess both wound points and luck points. When damage was inflicted, a player could chose to use their luck points to avoid the wounds, and the luck points would be refreshed, either after each battle, or after a good night's rest. Only the actual wounds inflicted would require healing.

As for rationalizing hit points, some number of hit points would be condensed into wound and luck points. For example, 3.5 hit points might equal one wound point. Weapons would do one wound, unless they were either exceptional or magical weapons.

The biggest problem I see with this solution: rpgers love rolling dice, and implementing such a system would eliminate the need to roll for damage. No more euphoria when a player rolls the maximum weapon damage, nor the groans of despair and recriminations when the player rolls a "1".

Such a change might be too much for players to bear.

The 1e AD&D manual is pretty clear that the hit points of high level characters represent skill and luck, plus a "sixth sense," more than the ability to withstand a huge amount of physical damage.

I agree, hit points are definitely more than simply wounds.

You suggestion regarding hit point recovery is a good one. Still, I'd be tempted to use the first level hit points as wounds, and additional hit points after first level represent skill, luck, sixth sense, and so on, and let players recover all of those after a good night's rest. Only when their original hit points get reduced would I treat it as wounds recovery.

Oh, I don't know...I think hit points and hit point recovery makes total and complete sense in the proper context...at least in B/X play (not necessarily in any later editions!).

In B/X an average 36th level fighter (the human maximum) would have 94 hit points. If he was beaten down to 1 hit point (just short of death), and had to recover with normal bed rest, it would take him an average of 47 days (or a little under 7 weeks). This is considering no modern medicine or paramedics helping the guy recover, right?

Well, seven weeks is pretty fair recovery time for a fellow that has taken massive amounts of damage, considering the lack of an ambulance on the scene...these are heart folk! And it's only because of his high level (skill, luck, resolve, etc.) that he was able to sustain so much damage, still survive and yet recover.

The low level character that survives damage has gotten off lucky and recovers quicker. The high level character uses every trick of the trade and sustains as much damage as humanly possible...and requires a long-ass time to recover from it (without magical healing).

I am starting with the assumption that most of the hit points after first level is not damage at all, but represent luck, skill, fate, sixth sense, and so on, allowing you to avoid what would otherwise be a serious or fatal wound.

I've collected a large amount of variations and ideas for wounds/fatigue/hitpoints/criticals.

And come to the conclusion that there is no universal system. And any system used should be based off the type of game you group wants to play (fast, abstract, loose, "realistic", detailed, crunch fest, etc) and the atmosphere of that game (gritty, heroic, epic, "realistic", etc).

My fast, simple, not terribly heroic: Hit points represent only luck, fatigue, etc. Not until you get to 0 is blood drawn / damage actually done. When that happens roll on a Death & Dismemberment chart.

For monsters it depends are they bad-ass from size and bulk -> wound points(actual damage), or from skill, magicalness, DM fiat -> hit points.

Mooks have no hitpoints and just roll on D&D table. Other ideas to deal with many minions are

Hitpoint pools. Assume all similar types (city guards) have same avg hp (5). Track all 12 guards together in one pool of 5x12 60hp. Every increment (5 in this case) of damage done = one dead guard.

Keeping track of hp on the map (assuming you use wet/dry erase map). Doing this in front of players seems so wrong but I've gamed with it and it works really well.

"Catch Breath/Binding wounds" Immediately following a battle, those who rest and bind wounds for 10min regain a hit die of fatigue. Can't gain more points than were lost during that particular battle.

"A flagon of wine" Drinking a pint of strong liquor restores one hit die per lvl of fatigue. Usable once per day.

After a nights rest all fatigue is restored.

I guess I like keeping it simple. Hit points are just how much damage your body can take. I like that heroic aspect of one bloody warrior reaping through a field of foes. Covered in wounds, arrows sticking out of him several places, but yet he continues on. When I am playing any version of D&D its more for the cinematic that realistic. I go to GURPS for that or god help me, Harn.

For 'mooks' I just have them all have the same hit points. Just easier.

Healing surges. Hate them. That's one part of 4th ed. that bugged me a lot. I just imagine all these players after a fight bearing down like they are going to take a dump to get hit points back. I dunno, maybe I am being overly critical of them.

Hit points (and their increase with experience levels) is at the extreme end of abstraction. As I had mentioned, EGG makes it clear that additional hit points gained per level are a combination/abstraction of many things and only partially reflect physical damage. It doesn't make much sense for a 1st level fighter (50% wounded) to recover in 4 days while a 12th level fighter (50% wounded) could take 4 weeks. I like the idea of 1 point per day times the experience level of the character.

The reality is that I have never worried about it as there has always been a cleric or three around to speed up the process.

I have luck and body points in my game. Luck points heal quickly and easily and represent narrowly dodging away.

Body points cause universal penalties as they are loss and heal at about 1 per week (if you make a health/con check).

With monsters, this isn't such an issue, big monsters have a big damage divider and still probably only have 4 or 5 body points before the fall over and bleed out. Low level minions, well if they take a body point in damage they are probably fleeing, take 3 or 4.. not many soldiers keep fighting when they are holding their insides in with their hands.

This makes battles really quick with minions, and still have the nice flow.

My players are quite happy with the Savage World system. They only have 3 HPs (ever!) and mooks only have 1 HP. You have to beat a toughness number to cause damage.
I recall the designer of SWs saying something like: "I want my bad-guys either healthy, dead, or running away. I don't want to track any more than that." - - And really, aren't those the only 3 states that matter?

Yes, Savage Worlds does a great job of condensing the game down for cinematic effect.

At some point, I really need to provide my thoughts on Savage World, as it has a lot to recommend it, despite my dislike for skills-based game-systems.