Dear Hasbro: I Hate You 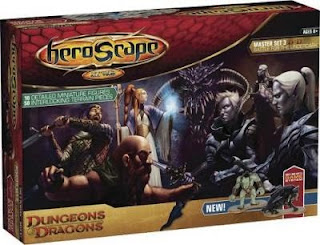 Here's the final clue to the true direction that Hasbro and WOTC are taking Dungeons and Dragons.

Heroscape: Dungeons and Dragons, "Battle For The Underdark". It's the ultimate kid-ification and commoditization of fourth edition D&D.
It comes with re-tread D&D minis, on new "Heroscape" bases, and hex tiles and plastic scenery to build a series of combat scenarios between a party of adventures and a Drow warband.
I wonder, for those of you still supporting WOTC's 4E D&D, is this truly the direction you want to see Dungeons and Dragons take? At what point will those "true fans of of D&D" vote with their wallets, and refuse to spend another penny on Hasbro/WOTC D&D products, in protest.
While I am not one of those purists that spurns any RPG product, unless it was printed before 1989, I am disgusted at the thought that D&D will now be sold by Hasbro as a bland and simplistic tabletop combat game, complete with pre-packaged battle-scenarios and recycled miniatures.
It's a sad day for the D&D legacy.
Edit: for anyone who would like to find out more, here is a link.
Posted by Aaron E. Steele at 4:52 PM

I don't disagree, but there were plenty of pre-packaged D&D boardgame-like iterations from TSR as well (esp. in the 90s). To be honest, if it pulls more people (read: kids) into the game, then I don't see the harm. I agree, that it LOOKS crass, but if anything--it's more an attempt to bring back the D&D minis game that WotC snuffed out a couple of years ago without having competition from one of their own products.

This is an interesting product. For years the designers have been trying to strive for a system where the workload of the DM is minimized. Perhaps the emphasis on game balance is part of this. If the game is "balanced" you don't need the DM to provide or determine what's equitable. Heroscape D&D represents a state where everyone can play.

Having said all that, I hope it's not the ultimate fate of D&D. I hope that the game continues to be pencil and paper based. I often wonder, though, if Hasbro will one day decide to market the D&D brand outside of books and dice.

Oh, goodie, nonsensical doomsaying. THIS, people, is why some people have a problem with some parts of the so-called OSR.

This is what I've wanted to see. Cross-brand promotion, some exposure in toy stores. You should have seen how my 14 year old just reacted seeing the picture and he hates 4e D&D, his local D&D club plays 3.x and Mutant Future.

Some good, alternative perspectives to my ill-tempered rant. Thanks for posting.

I tend to agree. The main reason I didn't make the switch to 4e, after happily jumping into 2e and 3.Xe was the mechanical sameness of the various classes. Every class has the same number of At-Will, Per Encounter and Per Day powers that seemed to vary little in terms of effect from class to class. It felt a lot like a board game and this product seems to be a logical progression.

Personally, I don't care how many kids Hasbro/WotC can attract to 4e any more than I care how many kids play Monopoly. If the price to keep Dungeons and Dragons alive is to create something unrecognizable to lifelong fans, than so be it. Happily there are companies like Paizo who are still in the tabletop rpg business.

I don't play 4e, but I collect Heroscape for the terrain, and interesting plastic minis.
--I'm happy to have 'teh drowz'. :)

I can see your point and appreciate your rant but the "true fans of D&D" as well as every other potential mainstream buyer (who may outnumber true fans) will vote with their wallets - if the game makes money, it will continue, if it doesn't then Hasbro/WotC will drop it like yesterday's tuna salad.

It might actually lead to more gamers raised from the ranks of the mainstream.

If the price to keep Dungeons and Dragons alive is to create something unrecognizable to lifelong fans, than so be it.

Even if the price actually leads the game back to its wargaming roots? It's not an analog of Chainmail--but Heroscape has as many similarities with Chainmail as it does with D&D. And I don't think this is 'where D&D is headed'. It's just another parallel track, like many it's had before.

Actually I'd love to get this! I heard a rumor that a D&D Heroscape was in production. I really wanted to get a minis wargame that I could play with my son and I think this is it.

As far as 4E is concerned, I've turned my back on Hasbro since 3.5. To me the clones and the original editions are the only D&D. But Hasbro still makes some cool toys.

I don't think this is the "final clue to the true direction that Hasbro and WOTC are taking Dungeons and Dragons." This is Hasbro cross marketing their stuff, and possibly bringing youngsters into the hobby of role playing... even if it is 4e.

Plus this isn't the first time there has been a D&D board game.

Also the D&D legacy has some pretty ridiculous items in its closet. A D&D wood burning kit? Is a board game with minis and terrain really so horrible?

Maybe we can hold off on the doom of Dungeons and Dragons? Evidence suggests that it's still going strong, both from WOTC with 4e and the OSR with it's retroclones.

As a guy who's bought other minis based games not for the games themselves, but for the minis to use in my RPG games (when I want or need to use minis), I don't see the problem.

We had the Dungeon! board game when we were little kids, Dragon Strike with it's awesomely craptacular video tutorial when we were in high school, and more recently WotC's attempt to revive Chainmail and then D&D Minis.

All in all, I think it will be a positive thing. All these kids getting into D&D through Heroscape will likely start with 4E, but are much more likely to give other RPGs and older editions of D&D a try once they get into the game.

Yea! for gateway drugs to RPGs! Even if they are just crassly marketed money-sinks.

Jay, I have no problem with skirmish-type minis games. Heck, I've sunk enough money into pre-painted plastics minis to buy a decent used car. But, I do recognize a difference between minis games and rpgs, even though I use minis a lot. The core issue for me is blurring the distinction. At some point, there will be a D&D 5e and what do you suppose it will look like, the creation of Gygax and Arneson or Heroscape? My guess is the latter. After all, business is not about "making" profit, it is about "maximising" profit and if the resources Hasbro is sinking into D&D could generate more return in the toy business rather than the game business, well, that's the direction they will go. Personally, I don't think big companies like Hasbro are good for the tabletop rpg industry.

Lord Gwydion: I was thinking the same thing, although I substituted "game" for "drugs". Six of one, half-a-dozen of another! ;)