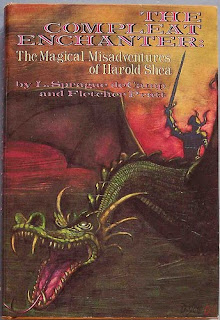 "In a world governed by magic, you may find the Law of Similarity, valid."

"The Law of Similarity may be stated thus: Effects resemble causes. For example, you can make it rain by pouring water on the ground, with the appropriate mumbo-jumbo."

"Another is the Law of Contagion: Things, once in contact, continue to interact from a distance after separation."

Chalmers continued. "From the elementary principles of Similarity and Contagion, we now proceed to the more practical applications of magic. First, the composition of spells. The normal spell consists of several components, which may be termed the verbal, somatic and material. In the verbal section, the consideration is whether the spell is to be based on the materials at hand, or upon the invocation of a higher authority. And the verbal component should conform to the poetic conventions of the environment."

However, there is also a somatic component to a spell, subject to more precise regulation. There is some point in connection with this component that eludes me."

While the old-school D&D magic system is often described as Vancian, it is actually a mish-mash of different magic systems, mixed together in an unholy goulash. Take the magic system described in deCamp and Pratt's magical misadventures of Harold Shea. In that system, spells can be created, without advance study or meditation, as long as appropriate material, verbal and somatic components are combined. While the impressing of spells upon ones mind was borrowed from Vance, the idea of material, verbal and somatic components, central to the magic system in AD&D, comes from deCamp and Pratt.

While I have a deep attachment to Vancian magic's daily spell preparation (from a game mechanic standpoint), I like the freedom of the Prattian magic system: players can produce any spell effect, on the fly, as long as they can come up with a reasonable argument for particular spell components, and can utter a convincing rhyme that would invoke the spell.

Hell, i'd give out experience points for that kind of "player skill" spell-casting.
Posted by Aaron E. Steele at 6:15 PM

And sadly have yet to read any Vance (although I would like to).

Great post. De Camp and Pratt's influence on the game in general and the magic system in particular is too often overlooked. And I love the idea of awarding xp for what you call "player skill spell-casting." I've been toying with similar notions myself; maybe it's time to begin experimenting a little....

I'd also forgotten about this. The Vance stuff gets center-stage treatment in part because of the borrowing of some names and naming conventions as well (I suspect).

I have great fondness for the de Camp and Pratt stuff. It's been ages since I read those stories but they still influence how I handle magic in most of my games.

The de Camp and Pratt connection is interesting, and new to me. I would not be at all surprised if that is a proximal influence on why D&D uses material components the way that it does. There's also some more history behind this, that you may already know about, but I thought I'd pop in and mention it just in case --

IF we analyse the principles of thought on which magic is based, they will probably be found to resolve themselves into two: first, that like produces like, or that an effect resembles its cause; and, second, that things which have once been in contact with each other continue to act on each other at a distance after the physical contact has been severed. The former principle may be called the Law of Similarity, the latter the Law of Contact or Contagion. From the first of these principles, namely the Law of Similarity, the magician infers that he can produce any effect he desires merely by imitating it: from the second he infers that whatever he does to a material object will affect equally the person with whom the object was once in contact, whether it formed part of his body or not. Charms based on the Law of Similarity may be called Homoeopathic or Imitative Magic. Charms based on the Law of Contact or Contagion may be called Contagious Magic.

Sir James George Frazer, The Golden Bough: A Study in Magic and Religion, 1890

The book is a study of magical and religious thought, and Frazer's claim was that he was describing some basic, shared, underlying ideas that are characteristic of magical thinking in folklore and myth. It's well out of copyright and readily available for free at Gutenberg or on your e-reader of choice, and it makes for interesting reading. Not that I've ever read the whole thing! Anyway, there's a whole chapter devoted just to "Sympathetic Magic," and there's a lot more in the book that is of interest.

Superhero Necromancer said...
The de Camp and Pratt connection is interesting, and new to me. I would not be at all surprised if that is a proximal influence on why D&D uses material components the way that it does. There's also some more history behind this, that you may already know about, but I thought I'd pop in and mention it just in case --

Lovely. It is suggested in The Compleat Enchanter that these 'magical laws' have already been identified, but I thought the authorial reference was a put-on. I was wrong!

Glad to do my small part as a node in the internet hive mind!

2. The infamous Raven C.S. McKracken included improvised rhyming magic in at least one of his pre-publication versions of Synnibarr. I can still remember one (profane) couplet that he gave as an example of it, when I was gaming with him back in 1993.

The spell system as presented in OD&D is almost completely Vancian. The spell components (verbal, somatic and material), weren't introduced until the Player's Hnadbook came out. So the DeCamp/Shea influence didn't creep in until AD&D.

My copy of GURPS Magic for 3rd edition had rules for rhyming magic. It always seemed like an interesting and fun idea, but I never did get around to trying it out in play.

"On the fly" magic requires the right kind of players, clever, creative non munchkin ones who can think on the fly.

Not always easy to find.

Vancian works for anyone, just lock and load.

That being said, the "roll your own" magic system like in Ars Magica, GURPS and many others have their charms.

As I understand it, Pathfinder will be getting one soon as well for those who partake of later editions.

Nathan P. Mahney said...
The spell system as presented in OD&D is almost completely Vancian. The spell components (verbal, somatic and material), weren't introduced until the Player's Hnadbook came out. So the DeCamp/Shea influence didn't creep in until AD&D.

You're right, the V,S,M components don't appear until AD&D.

Though the vsm requirements don't appear until AD&D, and OD&D spellcasting specifically does seem entirely Vancian, Moldvay's list of "Inspirational Source Material" for DMs includes the Incomplete Enchanter, and Gygax himself often cited de Camp and Pratt as major influences.

It could be done. But the system would really need a failure and fumble chance, not an all-or-none level mechanic. And the players would really have to respect your authoritay.

Good catch, Paladin. I'm just reading the Complete Enchanter for the first time and I was also struck with how closely D&D fire giants (as black, giant dwarfs) appear to be modeled on the one in the Norse adventure, although I suppose it could be a case of some both following some earlier source. I don't recall seeing any detailed descriptions of fire giants in Norse myth.

Anyway your post reminds me of way back as 9-11 year old geeks my friends made up rhyming spells for our protoLARPing (mostly thwacking at each other with sticks but slowly adding D&D elements as we were learning to play). M-Us had to compose rhyming couplets and we even wrote them down for future use but only lasted a couple of weeks.

Finally, I'd add that Bruce Galloway's Fantasy Wargaming owes a lot to Frazier as well. When I considered trying to rewrite the rules I thought the best way to keep the flavor but drop complexity would be to allow better chance of success to casters when the player can cite favorable 'influences' using the FW system of correspondences, which is based on astrology and occultism and not dissimilar to Fletcher/de Camp material components.

Gygax was quite upfront about the influence of Pratt and DeCamp on D&D. They're listed alongside Howard, Leiber, and Burroughs in his 1973 forward [sic] to OD&D as the only authors he mentions by name as being evocative of this new game he's presenting. Likewise, Appendix N lists Pratt and DeCamp first of all the authors Gygax sets aside for special mention as being deeply influential on AD&D. So, their influence is deep and well acknowledged.

If I were a cheeky person keen to create a new magic system for D&D to replace the Vancian/memorization one, I'd definitely turn to Pratt and DeCamp for inspiration, both because their ideas are intriguing, but also because one could at least argue that using it has a basis as a bit of Gygaxian source material.

That's a magic system that I could get behind.

I think a central feature of a DeCamp & Pratt-style magic system is the preponderance of mistakes and mishaps. In the linked stories, it seems that a failure rate is extremely high, which would tend to take care of potential power-gaming problems.

G1 and G3 really owe a lot to the first "Harold Shea" story- I even remember a reference to a mysterious "black licorice colored" being in Surtur's hall, so even the dark-elf connection may have been derived from these books.

I think you're right about G1 and G3. Someone needs to blog about the similarities.

How did G2 come about, I wonder?

You might want to take a look at my blog post on how I deal with magic in my games:

I should note that I have replaced the "Charisma" characteristic with "Mana", which might aid in your understanding of how my magic system works.

Oh, and for how "spell books" work for my game, look here:

And finally, to understand the "Elemental Nature" of characters, take a look here:

Maybe some of this will get your creative juices flowing.