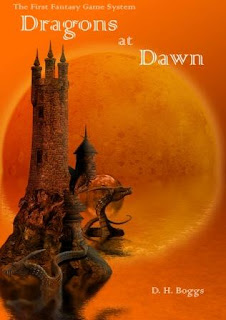 Anyone who has been following the old-school blogs for a while will remember the 2010 release of the Dragons At Dawn (D @ D) roleplaying game. Edited by D.H. Boggs, D @ D is a meticulously researched re-creation of the original fantasy game, as played by Dave Arneson at his gaming table from 1970-1973. That was prior to Arneson's collaboration with Gary Gygax, resulting in the 1974 printing of a little boxed set called Dungeons & Dragons.

D.H. Boggs did an admirable job of re-constructing those early rules and game approaches. Boggs also provided several direct quotes from Dave Arneson, on his approach to running a fantasy game and doling out experience points. I find Arneson's comments and original experience point system instructive, as it reveals just how far removed modern experience point systems are from the original purpose of the mechanic. Here's what Arneson had to say about experience points for roleplaying, as quoted in D @ D.
"The all pay lip-service to the roleplaying part, but they all end just having you roll different dice for different situations. There again, that has taken away from a lot of the spontaneity of actually roleplaying. When I do my games, I give roleplaying points for people staying within their character. If they want to go out and kill things, that's easy to do, and a lot of referees, that's all they do, but there's more to it. The richness is not in just rolling dice, the richness is in the characters and becoming part of this fantasy world." (Dave Arneson, Pegasus Magazine #14, 1999)
Not surprisingly, much of the criticism of later versions of D&D (and those other fantasy roleplaying games that have touted themselves as improvements to D&D) has been the focus, and pre-occupation, with making combat more prominent, cinematic, interesting, or (shudder) verisimilitudinous. Every version of D&D, and most competing systems, seem to spill inordinate amounts of ink creating ever-more elaborate and labyrinthine combat systems. This has culminated in what some players, of later versions of fantasy roleplaying games, lovingly refer to as "the grind", where most, or all of the gaming session is spent on one, or a few, combats.
Original D&D is oft-criticized for it's simplistic 'experience-for-gold-looted' mechanic. A fair criticism, from those who demand verisimilitude in their fantasy roleplaying. It is not realistic, they argue, that a person gains experience for lifting some gold and treasure out of a hole in the ground, don't you know.
D @ D uses a different set of methods for awarding experience points. One of those may be passing-familiar to those who use an 'experience-for-gold-squandered' mechanic.
"Wizards: Experience points are awarded to Wizards when they successfully complete the creation of a spell in the laboratory....Neither use nor casting of spells counts towards experience. If the player continues to make the same spell over and over, the referee may at some point opt not to recognize more experience points for it or give some lesser percentage. Likewise, the referee may opt to award more experience for successful new research.
Priests: Priests are awarded one experience point for every gold piece worth of treasure donated to their faith or otherwise spent in the service of their religion. Treasure must be gotten through the Priest's personal adventuring and cannot be donated by anyone else. Referees may take away experience points for any behaviour contradictory to the tenants [sic] of the Priest's faith.
All other classes: All other classes are awarded one experience point for every gold piece spent in accordance with the nature of the character. Referee's [sic] and players may develop special interests for the characters if desired, or simply award the points for any spending which is voluntary and not for some unusual project such as freeing a hostage or donating to a bridge construction project. Only cold, hard cash won through adventuring and subsequently spent may be converted to experience points." (page 43)
In the fantasy game originally played by Arneson, it was primarily through the recovery, and appropriate expenditure, of long-lost treasure hoards, that characters advanced in levels. Appropriate expenditure is a critical component for all classes, as it is only through the expenditure of gold (and the Wizard's case, both expenditure of gold for the spell-making materials, and time, in creating his spells) in ways meaningful to the character's motivations and interests that the characters can advance.
If you have not taken note yet, let me draw something striking about this experience points system to your attention now. No experience points for monsters killed in D @ D.
Monsters certainly appeared in Arneson's games, and were an obstacle to the recovery of treasure, but their destruction did not merit experience points.
Imagine removing the benefit of experience for monsters-killed and think just how radically this would change the nature of your fantasy roleplaying game.
Posted by Aaron E. Steele at 9:10 PM

Interesting. I wonder how the history of gaming might have been different if the Arneson approach had dominated?

I think a a fair amount of game discussion today (including precisely what sorts of situations there even should be rules for) has its roots in the (unspoken) view that rpgs are largely combat engines.

It must be the fascination with dice-rolling, as it is the one place in the game where significant dice-rolling occurs.

Interesting article. IMO XPs are a useful tool in encouraging the players to behave in certain ways. I can think of few players who really need encouraging to go out and kill things and take their stuff. Arneson found a way around that. Worth thinking about foi any campaign.

I like the idea of rewarding players for getting the swag without having to endanger themselves any more than necessary. This makes sense, and rewards cleverness. Really, who, other than someone with a death-wish, goes out looking for monsters to fight? If it were me, I'd be looking for a way to get the monster's treasure without having to bleed for it.

Although it's kind of tangential, it got me to thinking that most of what we call XP in all of our favorite game systems, including D@D, are more like "Accomplishment Points". That is, how much closer have we gotten to our goal of wealth, power, or character fulfillment.

It's interesting to muse on what actual "Experience Points" would be - the intensity, length, or variety of actual experiences that PCs have and learn from. The Rientsian travel XP might be an example. XP/hour or XP/session would also be examples.

I think "kill the monster, take its stuff, level up" has always overshadowed D&D and has influenced countless campaigns, not to mention CRPGs like Rogue and Diablo.

The Riddle of Steel RPG (while being saddled with a ridiculously complex and lethal combat engine) had a great mechanic whereby experience was earned based on what the character cares about (called Spiritual Attributes or SAs). You can kill people and take their stuff all day long, and go nowhere. Now, if one the people you killed was Baron Blackhand because he slaughtered your family -- that's worth XP! Not only that, but you gained a bonus to actions related to your SA.

I own Dragons at Dawn, and I often wish it had made it to market first. Arneson had some great ideas about the direction an RPG should take, and I think the hobby would have benefitted greatly from his style of play being the first to hit the market.

Negotiation - a skill Merchants excell at - as well as lying, turning on the charm, and any other trickery players could come up with, were important survival tools in Arnesons games. He Never hesitated to place characters in situations they could never hope to fight their way out of. In level one of Blackmoor dungeon for example, Characters were just as likely to run into a 10 HD vampire as a 1/2 HD Goblin.