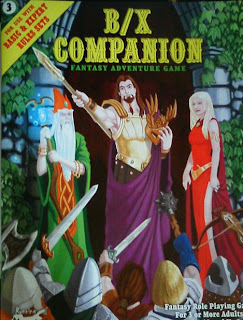 One of my fellow old-school bloggers recently remarked that its feels like a second golden age for Dungeons and Dragons. That comment was made in relation to the explosion of available rulesets, accessories and adventures compatible with early versions of D&D. In some ways, we are now experiencing an embarrassment of riches in the old school community.

One has to look no further, in verifying this observation, than to such newly-published works as James Raggi's Lamentations of the Flame Princess Weird Fantasy Role-Playing, Rogue Games' Shadow, Sword & Spell, or JB's B/X Companion.

While the former two are stand-alone games, JB's B/X Companion is intended to supplement the 1980 Moldvay/Cook Basic and Expert Dungeons and Dragons rulesets, thus provoking the title of this book, the B/X Companion.

When first published in 1980, the B/X D&D rulebooks promised a companion-level supplement would follow. That companion supplement was never published, due to the replacement of the B/X with a 'kiddified' BECMI set of D&D rulebooks. JB has corrected that oversight, by publishing his own version of a companion rulebook.

While ownership of the original B/X rulebooks is not absolutely necessary to get value out of the B/X Companion, it is presumed that a purchaser will also have a compatible basic/expert ruleset, such as Labyrinth Lord or some other similar game, in order to use this book for gaming.

The cover of the B/X Companion, by Brian DeClercq, fits in perfectly with the Moldvay/Cook rulebooks. The three adventurers from the covers of the B/X rulesets are shown, in a fitting homage to the original 1980 Erol Otus covers. The rulebook itself is 64 pages, the same size as the Basic and Expert books, and features 25 excellent interior B&W illustrations by Michael Cote, Kelvin Green, David Larkins and Amos Orion Sterns. 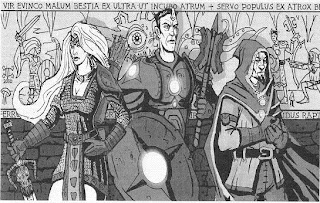 Above is an example of the interior artwork. The illustration is by Michael Cote, showing three adventurers, standing before a bas-relief that reveals a battle between themselves and a one-eyed, tentacled monstrosity. If you enjoy the artwork, above, and the illustrations from the original B/X rulebooks, you're in for a treat with the B/X Companion. The artwork in the B/X Companion captures the same feel as the artwork from the original books. JB was most fortunate to have such a diverse and talented group of artists providing him with illustrations for this rulebook.

The Companion title of this rulebook, refers (of course) to character levels 15-36, since the original B/X rulebooks only covered characters levels from 1-14. In early versions of D&D, high level play was not restricted to combat with larger and more dangerous monsters, although JB covers that ground in the B/X Companion. In addition to those sorts of adventures, the B/X Companion also provides rules for running Dominions, commanding armies and engaging in mass combat, and travelling to other planes.

The rulebook is laid out in a 2-column style, in keeping with the presentation of the original B/X rulebooks, and is well-written. It includes rules for advancement for the various classes, descriptions of high-level magic-user and cleric spells, additional advice on adventuring, new combat rules, along with a mass-combat system, new high-level monsters, additional magic items, dominion creation and management, advice on designing high level adventures, and rules for travelling to other planes.

Among my favourite parts of this rulebook are the mass combat and monster sections. The mass combat section feels true to the role-playing conventions of Dungeons and Dragons, but also utilizes a wargame system that provides a sufficiently abstract combat resolution, in order to ensure mass-battles do not become bogged down in the minutia of individual combats. The section on monsters provides several novel creatures, such as animals of legend, jubjub bird, and ruinous powers.

At $28, this rulebook is expensive. But for sheer nostalgic bliss, fused with broad applicability to old-school and B/X gaming, the B/X Companion rulebook has few peers.
Posted by Aaron E. Steele at 7:41 PM

I was fortunate enough to have received a free, autographed copy from JB, and I must say that I find it to be one of the best of the amateur press efforts (that didn't require arms or legs being sold) I have seen, or read of.

My own experience with, and love of the Moldvay/Cook/Marsh rules-set naturally endears me to the B/X Companion, as a concept.
--JB has outdone my hopes for any such product, and this is only in a surface examination (due to my time constrains of late).

KIf nothing else, I am certain that the B/X companion will be food for thought in my further writing of the Urutsk line of publications.

I feel doubly fortunate to have received my copy. :D

@ Pal: Thanks for the review, and the kind words. I'm just sorry it took so long to reach you!

@ TimeShadows: Thank YOU for the kind words. If it can provide "food for thought" with your own writing, I shall be very pleased indeed.
: )

JB: Oh, it has, and it will continue to feed my thoughts.
--I'm looking forward to reading your Domain and Mass Combat sections thoroughly.

You've done a great job of maintaining the feel of the B/X sets. :D

Thanks for the review, PiC. Some quick questions:

Does the B/X Companion include the high-level thief special abilities that were mentioned briefly in the Cook Expert set (but dropped in the Mentzer rules)?

Is this available as a pdf?

"The cover of the B/X Companion, by Brian DeClercq, fits in perfectly with the Moldvay/Cook rulebooks."

I disagree. While the cover looks quite nice, stylistically it is radically different from the Otus B/X covers (i.e., it looks like piece of 'high fantasy' instead of Otus-esque 'weird fantasy').

Akrasia: The Companion does indeed have high level thief abilities. To my knowledge it's not available as a PDF.

As for the cover, I think aping Otus would have been a mistake. I don't think JB was trying to produce something that necessarily looked like it was published in 1982 (other than matching layout), so the more modern look of the cover art is appropriate in my eyes.

"I think aping Otus would have been a mistake"

Yes, most likely. I think that the cover is fine. I just don't think that it "fits in perfectly" with the B/X covers.

That piece of interior art is awesome! Thanks for including it in the review. It's making me want the book even more.

It's not available as a pdf. JB said something about doing one eventually, but not anytime soon.

Incidentally, I'm with Akrasia on the cover - it's a perfectly fine cover, but doesn't naturally mesh with the B&X covers. I must confess that I was hoping for soemthing that maybe showed the combat with the Sea Dragon in the background or maybe went one level further back than the X cover and showed someone seeing the wizard seeing the combat. Of ocurse, I get that without Otus drawing it, that's a bit trricky.

Agreed, it's not an Erol Otus cover, and doesn't have the boxed art that the other two books have.