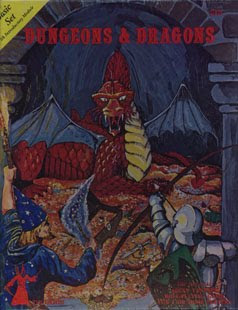 Published in 1977, the illustration on the box cover of Holmes D&D was the first full cover treatment, that I had ever seen, of a D&D encounter between adventurers and a dragon. It blew my then 11 year old mind, and was the subject of much day-dreaming.

The cover, by David Sutherland III, shows two adventurers -- a blond, pointy-hatted wizard, and a heavily-armed and armored fighter, aiming his bow and arrow -- confronting a roused red dragon lying atop an immense hoard of treasure. The wizard is holding a torch and casting a spell with his wand, as the two stand in an archway made by two pillars. The final encounter in the Dungeon, or at least the most rewarding, if the adventurers are successful and cart all of that treasure back to town!

Holmes D&D is, arguably, the most flexible of all iterations of Dungeons and Dragons. I say this mostly because it is incredibly rules-light, being only 48 pages of rules (for character levels 1-3), compared to the 64 pages for Moldvay, and Mentzer, D&D rules. It's "lean-ness" provides more opportunity to "play it your way", but Holmes is explicit in encouraging that freedom.

"A final word to the Dungeon Master from the authors. These rules are intended as guidelines. No two Dungeon Masters run their dungeons quite the same way, as anyone who has learned the game with one group and then transferred to another can easily attest. You are sure to encounter situations not covered by these rules. Improvise. Agree on a probability that an event will occur and convert it into a die roll -- roll the number and see what happens! The game is intended to be fun and the rules modified if the players desire. Do not hesitate to invent, create and experiment with new ideas. Imagination is the key to a good game. Enjoy!"

Holmes had his own idea of regarding the purpose of adventuring in D&D. He has this to say about the course of an adventure, and the rewards to be pursued.

"Many gamers start with a trip across country to get to the entrance of a dungeon. A trip apt to be punctuated by attacks by brigands or wandering monsters or marked by strange and unusual encounters. The party then enters the underworld, tries to capture the maximum treasure with the minimal risk, and escape alive."

Holmes, like other editors of D&D rulesets, encouraged players to recover as much treasure as possible, while avoiding any associated risks. While no definitive directions were given on the proportion of treasure to be awarded (compared to the amount of experience that the characters were expected to receive as a result of defeating monsters) Holmes does provide us with a sample dungeon, stocked with denizens and loot. In that dungeon you can recover 4500 gp worth of treasure, and obtain 750 xp from monsters, in addition to recovering two scrolls, a +1 dagger and two magic swords. The experience points from monsters equals 15% of the experience points. Therefore, 85% of the experience is derived from the treasure (not counting the magic items).
Posted by Aaron E. Steele at 12:47 PM

I've never thought about it that way. Thank you Paladin!

I've really been enjoying your comparison of experience in different systems. Thanks for making this study - it has been interesting and thought-provoking.

One thing I always wonder about with the monster-vs.-treasure xp breakdown (and I'm not super-familiar with the Holmes dungeon): In most dungeons, if you explore the whole complex, you probably *will* fight the keyed monsters, and some wandering monsters besides, and you probably *won't* find all the treasure, especially if some of it's hidden (and especially since you don't want to waste time searching every square foot because of the wandering monsters).

So on an average delve, the percentage of xp from monsters in the dungeons I've seen is a bit higher than reading the key would suggest.

(Although even adjusting the monster xp percentage up a bit, it's obviously still far more efficient and less risky to focus on treasure over combat.)

This was my first as well. Couldn't make heads or tails of it when I first got it :)

So on an average delve, the percentage of xp from monsters in the dungeons I've seen is a bit higher than reading the key would suggest.

That's certainly possible. The designers expected most of the experience would come from gold, but lots of people played it differently.