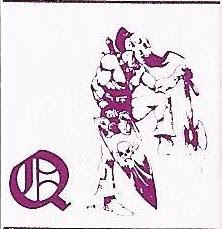 Following the huge success of Melee and Wizard, Metagaming released a long line of Microquest adventures, starting with Death Test. The Microquests were pre-programmed adventures, somewhat akin to the choose-your-own-adventure line of products. Thus, they were perfect for those who wanted to play a solo game of Melee or Wizard.

The original Death Test adventure hook was rather lame. The local overlord stocks a obstacle-course dungeon and sends potential hired goons through the labyrinth to test their mettle. You are one of those potential bands of hired goons.

The obstacle-course was a mixture of straight-up combat encounters, and gotcha traps. If you survived the Death Test (and the back cover warning was not hyperbole: this adventure was a KILLER) you arrived at the end of the obstacle-course and were either offered a job as a hired goon or were executed for running away from combats too many times. Harsh. 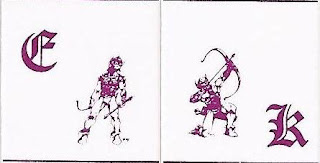 While the adventure hook was pretty lame, the gameplay was fun, and Metagaming's micro-art reached its zenith with Death Test. Pat Hidy was the illustrator for Death Test, and the most memorable adversary micro-art comes from the counter set that was included with this Microquest adventure.

Pictured, at the top, is a malevolent-looking dude that we used as an evil wizard, if that's what was called for in a particular combat. Looking at the figure now, i'm not sure why we thought he was a wizard, as he clearly possesses a battleaxe and shield, and has a sword strapped to his back.

Also included among the 35 Death Test counters, were seven goblins, six of which I have reproduced here. The most memorable goblins, for many of you, will be the first two: they appeared either in the Metagaming ads in Dragon Magazine, or on the back covers of the later Melee "boxed-set" back covers.
For those of you keeping score, you will note that five of the seven figures above are topless. I think its safe to conclude that Cidri, the assumed setting for The Fantasy Trip, is a jungle-world, where the climate is too hot for the employment of upper garments.
Posted by Aaron E. Steele at 7:06 PM

Yes, I loved the art from Death Test. The adventure was fun in a classic early dungeon crawl "dead if you do, doomed if you don't" kind of way.

I was a hired goon. I may also have cheated.

But would the local overlord really want goons who play by the rules?

Sean Robson said...
I was a hired goon. I may also have cheated. But would the local overlord really want goons who play by the rules?

We fought through the Death Test several times before we "won", if that's the same kind of cheating your talking about.

Our first group died in the dungeon, the second was executed for cowardice.

seaofstarsrpg said...
Yes, I loved the art from Death Test. The adventure was fun in a classic early dungeon crawl "dead if you do, doomed if you don't" kind of way.

I much prefer the Metagaming goblins to the TSR goblins.