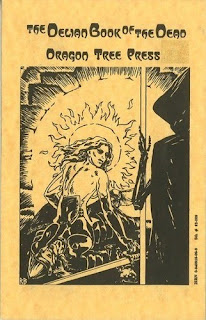 All this talk of Arduin over at Jeff's Gameblog has me thinking about another set of old-school, gonzo, D&D-compatible rulebooks : The World Of Delos.
Ben & Mary Ezzell wrote The World Of Delos game supplements in the 1980's, and dedicated their "Planes of the Afterlife" section of The Delian Book of the Dead to Arduin's author, Dave Hargrave.
The cover art of The Delian Book Of The Dead ("the Dead") is by Roland Brown, who also provided the cover and interior art for Arduin's The Lost Grimoire IV. The cover of the Dead shows a deceased Amazon, heavily armored, lying upon a funeral bier, attended to by the Grim Reaper, as her spirit slowly rises from her body.
The 145 pages of the Dead cover a lot of novel role-playing territory, as does the entire World Of Delos book series. The Dead provides rules for a new class, the Archaeologist (intended to emulate Indiana Jones, Rick O'Connell and other egyptologist-type characters from film and literature), a long section of helpful tips and adventure locations for prospective tomb-robbers, six pages of magical doors, windows and mirrors to delight, confuse and confound your players, 10 pages of gems, including a description of the possible magical uses for each, several pages on unique magic arms and armour whose benefits and drawbacks go beyond mere combat adjustments, potions and poisons of uncommon use and effect, a long chapter on the variety and ecology of Delian spiders, a section on the acquisition, care and feeding of strange pets, and an adventure that takes you through several "Planes of the Afterlife" in search of an artifact that may lead the adventurers to a most singular conclusion.
In addition, the Dead provides a new character class: Phantoms. Phantoms are former player characters, whose deaths came violently, suddenly, or prior to the completion of some important quest, and are thus unable to leave the prime material plane until their unfinished business is concluded. 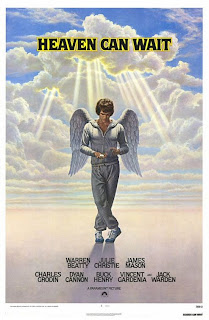 I must admit, the idea of player characters as Phantoms has a certain allure. I am reminded of the old 1978 film, Heaven Can Wait, if in title only. In that film, the incomparable Warren Beatty plays a narcissistic and reckless football quarterback, whose guardian angel transports him to heaven before his time. Due to the mix-up, Beatty's spirit is sent back to Earth. Unlike the Phantom class, where he would exist as spirit, he is placed in the body of a wealthy, recently-murdered industrialist, until St. Peter can find a suitable replacement body for Beatty, with hilarious and sexy results.
The allure of the Phantom class is that it allows players to continue playing a favorite character, but at the same time honoring the old-school tradition that, once you're dead, you're dead.
The mechanics are relatively straight-forward. If a character dies, the player may choose to roll to see if there is sufficient purpose keeping her from ascending into the afterlife. She combines her Int, Wis, Level and prime Attribute, which is her base percentage chance to remain on the material plane. That score is modified by other variables, for example, whether the character was on an important quest before her passing, whether her belief system included an afterlife, whether her death was violent or sudden, and so on. If the player rolls percentile dice and the result is lower than the final number, her character can come back as a Phantom.
Phantoms lose all of their prior class abilities, and start as 1st level Phantoms, with their own experience table, and additional hit-points and special abilities gained at each subsequent level. Phantoms are invulnerable to normal attacks, although they are susceptible to magical weapon and spell attacks, and are doubly vulnerable to attacks from the undead. At first level, they are unable to impinge upon the prime material plane, other than being visible in darkness, and can only communicate telepathically. They recover hit points normally, but if the Phantom should ever be reduced to 0 hit points, the character immediately and unavoidably ascends to the afterlife. Some of the special abilities that are gained by higher level Phantoms include the power to become material, cause fright, telekenesis, teleaudience, detect poison, project cold, and control flames.
Part of the limitations of the class is that the Phantom must never stray from the purpose for which she remains on the material plane. For example, if the party was on an important quest when she died, the Phantom must continue towards that goal. If the party abandons the quest, the Phantom must continue on. As another example, perhaps the purpose of the Phantom is to protect her friends, Then if the friends die, she would ascend to the afterlife. Another purpose of the Phantom might be to avenge her own death. In that case, once her killer died, her purpose would be fulfilled and she would leave this world.
The chapter on Phantoms concludes with some suggested reading for playing and refereeing with this class: Blithe Spirit, by Noel Coward; Hamlet and MacBeth, by Shakespeare; Immortality Inc., by Robert Sheckly; Brief Candles and Happy Returns by Manning Coles; and Topper by Thorne Smith.
Posted by Aaron E. Steele at 9:25 PM

I just want to say I saw "Heaven Can Wait" along with "Grease" as part of a double-feature at a Drive-In movie theater when I was a kid. And I remember loving both.

Just wanted to date myself for a moment. The Delian Book seems cool, too.
; )

Same. Sadly, several years ago they tore down the Drive-In I saw those two movies at.

Now its a trailer park.

Very cool. I remember and old Marvel Comic where heroes visisted a land of the dead and all kinds of dead heroes and villains were around. Love that stuff.

Too bad in my game world death is fairly rare. Gotta pump it up a notch.

The Adventure in The Delian Book of the Dead is quite good, in that it holds out the possibility for those Phantom Characters to return to the material plane as the living.