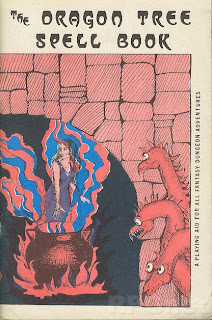 Dave Hargrave wasn't the only one publishing gonzo, D&D-esque gaming materials in the late 70's and early 80's. In addition to the Arduin materials, Ben and Mary Ezzell of Dragon Tree Press were (and still are) publishing materials for their own fantasy setting, dubbed Delos (any similarity to the Greek island of Delos, and the Delian League is purely coincidental).

There are some interesting and useful spells in The Spell Book. But the real value to be derived from The Spell Book is within the first 27 pages.

Those first 27 pages provide a summary of Newton's Principia Arcana, an ancient tome that reveals the four types of magical mana, from which are derived five magic systems. The derived magic systems are:

Got this book sitting six feet from my computer right now, under a stack of arduin grimoires.

The variant spell systems are certainly a good read and were an eye opener to me on how to stretch the magic system, for a campaign back in the 80's, still good today really.

I also have this book downstairs (as well as all of the original Arduin books and dungeons, of course) . . . and the original little D&D books and supplements.

I just came across your blog today and am enjoying it.

A slightly belated Canadian Thanksgiving back at you (I'm on Vancouver Island in BC) . . . and I just finished a "yuck sandwich".

Gravy on one slice of bread, cranberry sauce on the other; dressing on the gravy side, turkey on the cranberry side. Fold together and you've got a "yuck sandwich" . . . which despite the name is quite tasty.

I eat those all the time. We usually have turkey buns a couple of hours after thanksgiving dinner, complete with gravy, cranberries, turkey and stuffing. Don't forget the dill pickle.

Jeff, which one of your blogs should I be following? Bluvardy? Emperor v Elctor?

I'm the owner of "Emperor vs Elector" group blog (80-some members), but it is for 18th century Imagi-Nations.

My main blog is "Saxe-Bearstein", but it is primarily geared toward historical gaming (as are most of my blogs).

Bluvardy is my RPG blog . . . but it is mostly about my system and I haven't actually been running any games lately.

So, you get to choose depending upon your interests.