Character Archetypes in The Fantasy Trip 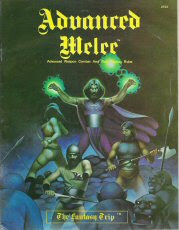 I know saying that may make me seem backwards amongst many modern rpg players. Modern sensibilities lean towards highly unique, customized characters. No "Elves as class" for them.

The reason I like archetypes and fantasy tropes is it provides a convenient shorthand when role-playing. The inevitable rebuttal can be made ... that's not role-playing, that's sock-puppetry! My response is, when you first begin playing a character in an old-school rpg, you have little idea who this character is, and having those tropes, as a crutch to fall back on, is welcomed.

I make these observations, in relation to The Fantasy Trip. That game system provides a list of just those sorts of archetypes, when discussing the kinds of hero characters a player can be. That list is useful, as it provides "flavor" to a character. The list of "non-wizardly" fantasy tropes from The Fantasy Trip goes something like this: Amazon, Assassin, Barbarian, Blademaster, Guildsman, Leader, Mercenary, Priest, Rogue, Spy, Tank, Thief, Tinker, and Woodsman.

The "Advanced" versions of The Fantasy Trip are heavily skills-based. This may have been one of the earliest skills-based game systems out there. Of course, playing those archetypes, OD&D-style, without a skills system, you might simply state, "my fighting-man character is a former spy" and the DM will let you do certain things because of it.
Posted by Aaron E. Steele at 1:40 AM