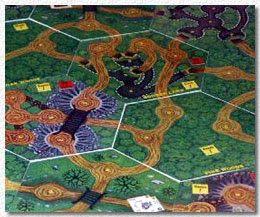 I consider Avalon Hill's Magic Realm to be one of the greatest, and worst role-playing games of all time.

It is the greatest because it does several amazing things:

(1) creates 16 fully realized, unique and utterly fascinating characters using just three basic abilities. Fight. Move. Magic. That's right, 16 characters that play completely different from each other, using just three abilities. On the surface, this is as rules-light as you can get. How is this AT ALL possible to have characters with so few abilities, and each still be interesting, you ask? Find someone to teach you this game, and you will see!

(2) allows you to play interesting outdoor adventures. In my 30 years of role-playing, outdoor D&D adventures have never been able to match those played on a Magic Realm board.

(3) rewards both cooperative and competitive play. D&D, particularly in its modern iterations, is designed for, and relies on cooperative play. With Magic Realm, there are advantages both to cooperate, and to compete.

(4) eliminates the need for a referee.

I will post more about Magic Realm, the good and the bad, later.
Posted by Aaron E. Steele at 11:39 AM